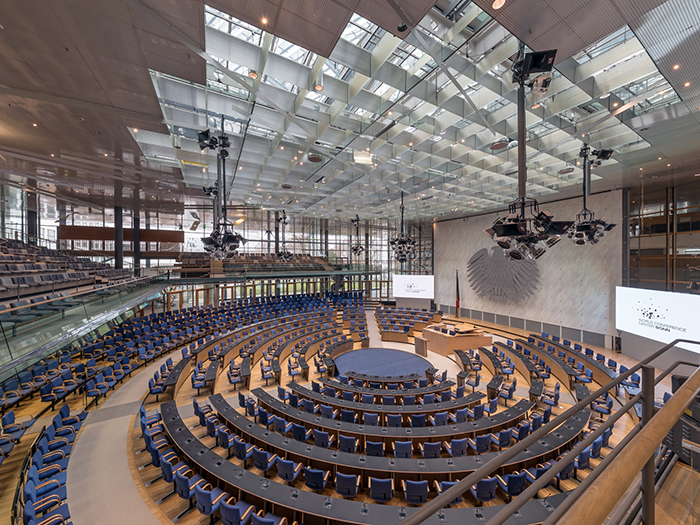 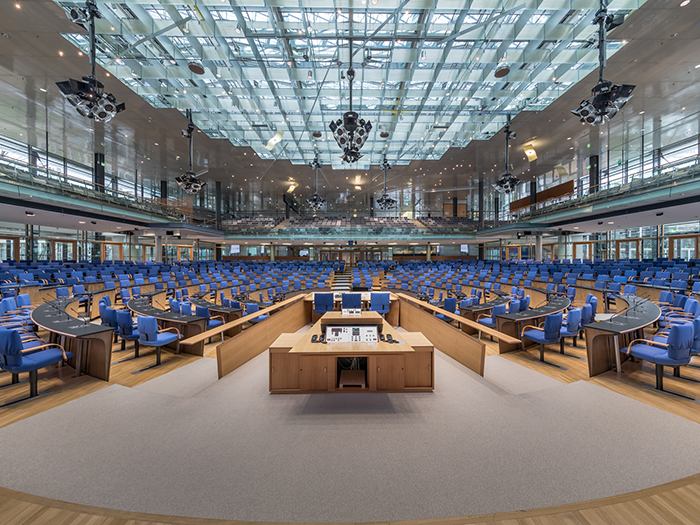 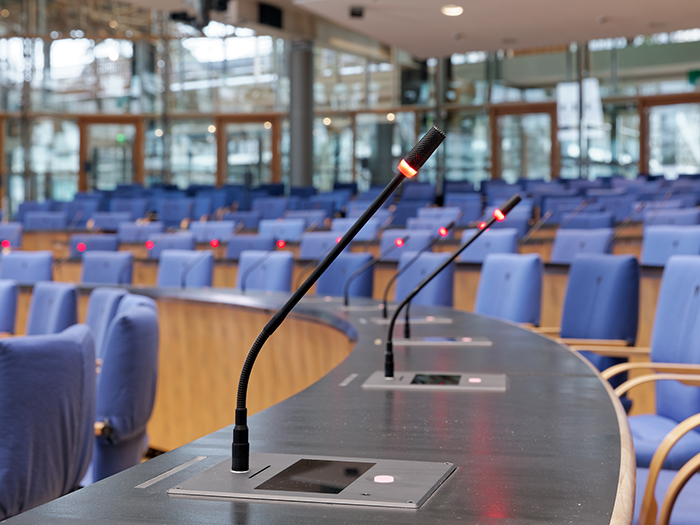 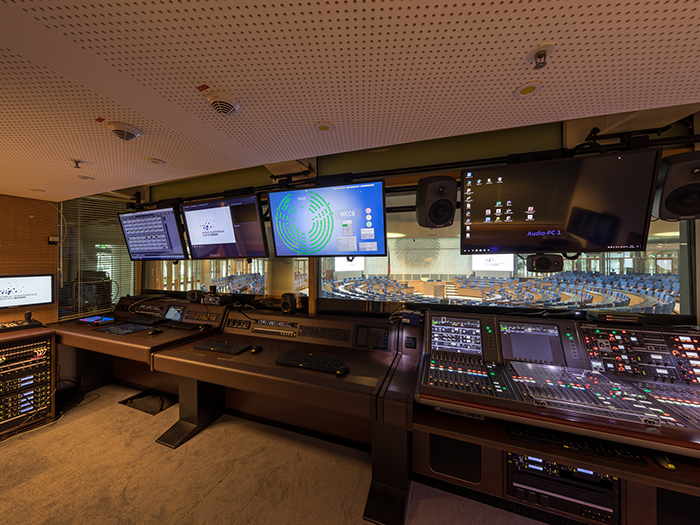 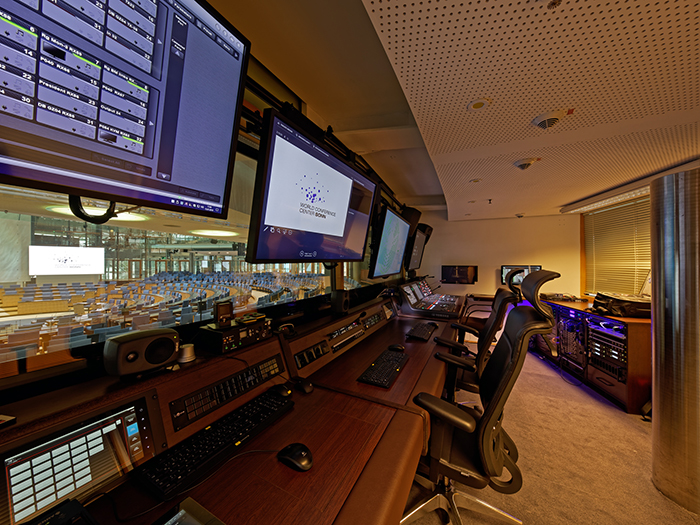 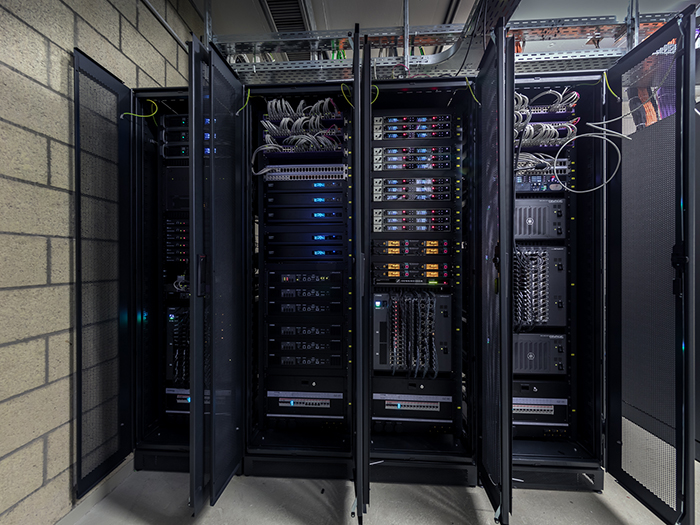 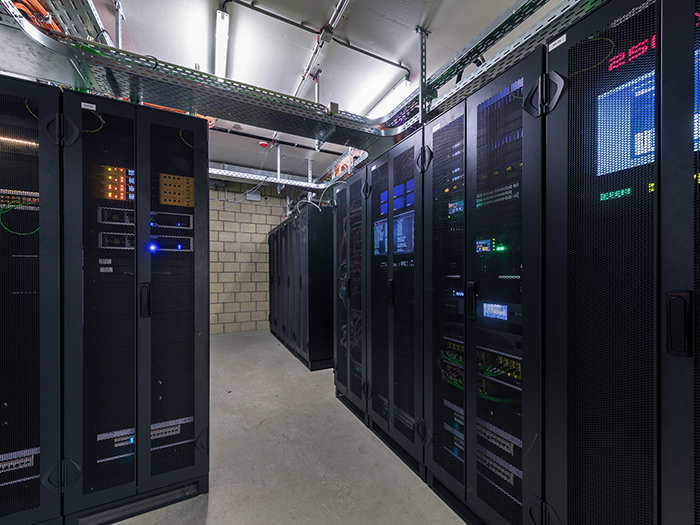 Two slim, high-performance Fohhn Focus Modular Beam Steering Arrays, several metres long, were used for reasons of historical preservation. They are housed in colour-matching painted enclosures to the left and right of the ‘German Eagle Wall’ and blend almost invisibly into the overall appearance of the wall behind the federal eagle, which has a room-acoustic effect with a perforation. Thanks to the electronically controllable directivity of the loudspeakers, it was possible to react perfectly to disturbing acoustic effects and achieve a high level of feedback resistance. One focus at events is on speech transmission. However, the trend is also towards music events with classical music, jazz, rock/pop, which is why the sound system is also ‘dimensioned’ for these scenarios with additional subwoofers. Six Focus DLI line array speakers on the existing ceiling lights provide the acoustic supply for the grandstand. 650 ic audio DL 06-200/T-EN54 ceiling-mounted loudspeakers for announcements, gongs and alarms are distributed throughout the entire location, including the foyer, ancillary rooms and sanitary facilities, kitchen and restaurant. A Yamaha Rivage PM 10 system with TwinLANE high-speed network and a CS-R10 control panel as well as several RPio622 input/output units goes into action for in the control room adjacent to the plenary hall.

For the technician’s intercom applications, an Artist system from Riedel Communications has been chosen, which includes mobile Bolero beltpacks and fixed microphone units in the control room and all central units.

Since the plenary hall serves as event location, Leyard LED walls made of Leyard LYD-TVH026RSN modules with 1.6 mm pixel pitch in the format of 4.80 x 2.70 metres (16:9) have been available on the right and left of the ‘eagle’s wall’, suitable for daylight. The entire video infrastructure was completely renewed for this purpose. In the engineering room there is a lightware matrix with 144 x 144 crosspoints (“25G-FR144x144 Hybrid Matrix Router”), which is one of the largest systems installed in Germany. It connects broadcast signals with image suppliers from conference technology, e.g. presentations on customer laptops. The matrix provides numerous HDMI interfaces to which six specially configured PCs from Digital AudionetworX (each with several video outputs) are connected.

Devices that are further away are safely connected by fibre optic cable to prevent interference. The possible routings open up maximum flexibility and can be patched either via the control software belonging to the matrix (KVM workstation in the control room) or via Crestron touch panels. The video infrastructure in the plenary hall is now suitable for 4K resolution from source to sink. The final image mixing for video walls and preview displays takes place via an Analogway Ascender 48 Video-DSP, controlled with a touch panel.

The Plenarsaal, designed by architects Behnisch & Partner, was the former parliamentary seat of the German Bundestag from 1992 to 1999. The building then became a conference centre and is part of the WorldCCBonn now. The plenum is dominated by glass and steel without a continuous outer wall, with isolated concrete walls serving for the statics. The lack of speech intelligibility was already strongly criticised after the first move to the parliamentarians. For an improved use, the available, outdated media technology of the 90s had to be adapted to the internationally accepted state-of-the-art technology. The preservation of historical monuments demanded that the new installation technology has to fit in as ‘invisibly’ as possible into the existing ambience.

Graner+Partner engineers began planning at the end of 2017 and accompanied the installation. Start was in March 2018. The modernisation measure was subsidised by the Federal Office for Building and Regional Planning with five million Euros on condition that Salzbrenner Media guarantees completion of the installation work and commissioning by September 2018.

The specialist planners carried out acoustic measurements based on the glass/steel/concrete architecture in order to determine the reverberation time and problematic reflections. With the help of a virtual hall model, the electroacoustic simulation was implemented in EASE, archive plans of the hall from the 90s were researched, elaborately digitalised and various loudspeaker designs were played through on the computer – the sound solution had to comply with the requirements of historic preservation, as well as many detailed solutions. The installation planning was carried out according to qualitative and monument protection aspects.

The existing media technology components such as the prominent loudspeaker ceiling artefacts with their transparent Plexiglas housings and the permanently installed large cameras were not to be removed. For this reason, the decision was made to use the slim, powerful Fohhn sound lines, which, when mounted there, do not optically apply, but deliver maximum performance.

Time was a big challenge: The new installation should take place during the running operations and rather quickly between the events, but should not disturb the course of events. Therefore Graner+Partner determined in advance which system components could be dismantled without affecting the operation of the event and where temporary solutions would be required.

The history and significance of the building are unique in world history. The fact that the former West German parliament building has been turned into a conference centre with multifunctional and modern use is also evident. In addition to lectures, conferences and political events, the centre is also open to musical events such as classical concerts, jazz, rock and pop, provided that they are consistent with the location´s dignity. The newly installed media technology now also covers this event portfolio. Due to the complexity of the contract, punctual execution and exact adherence to the budget are of particular importance. Although the work took place between operations and the time window was very tight, the deadline was met to the letter. This is rare for such complex projects and should therefore be emphasized.

The plenary hall now has a highly flexible and powerful infrastructure based on a redundant 10 Gbit fibre optic network, a very extensive video matrix lightware 25G 144 x 144 and a discussion system with 260 state-of-the-art microphone units as individually manufactured retrofits from the Brähler DIGIMIC product family, which are elegantly and completely integrated into the tables.

The technically sophisticated control room is located in a very small space. The contained working tables, user interfaces and screens are ergonomically adapted to the individual workflow of the technical engineers. All media technology is completely UPS (Uninterruptible Power Supply) buffered.

The AV professionals on site also notice the extensive equipment and the clarity in the technical rooms. Despite its high complexity, the state-of-the-art technology consisting of audio, microphone, mixing console, intercom and communication technology, video technology and control technology, is easy to operate and, in compliance with monument protection regulations, perfectly integrated. The event participants only notice the outstanding audio and video quality and the smooth running of the event at the end of the day.