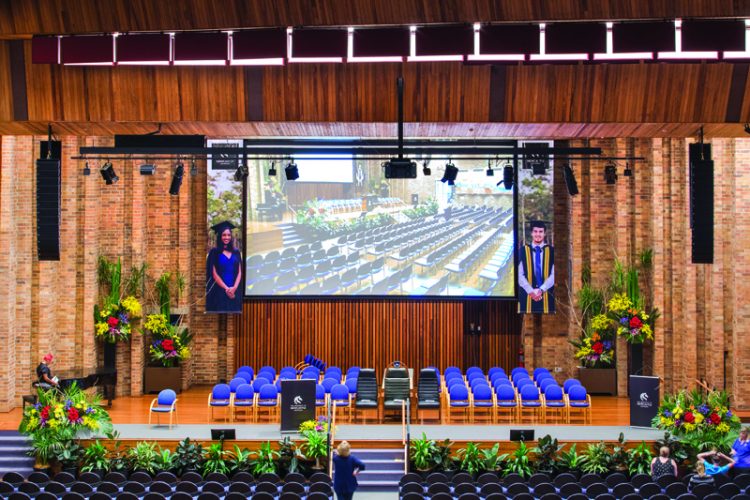 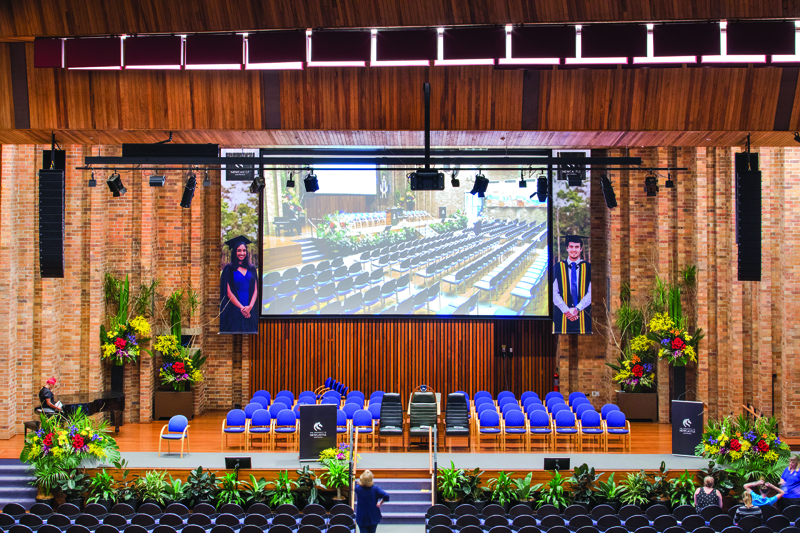 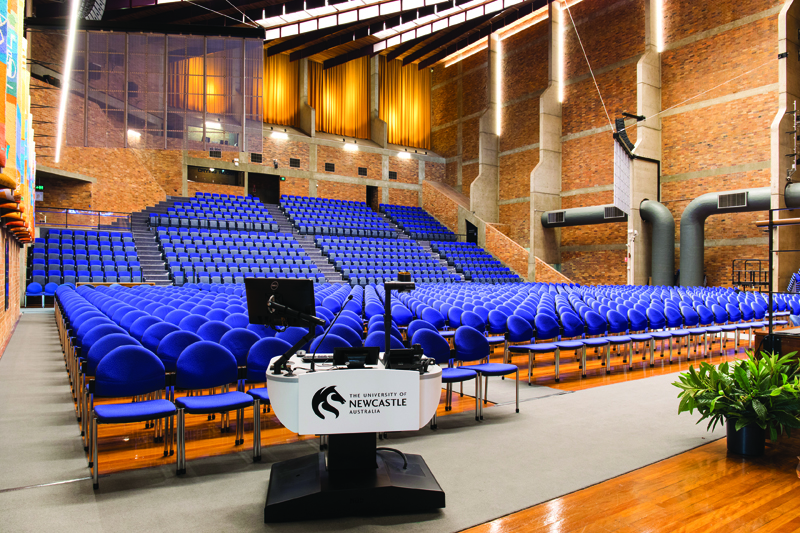 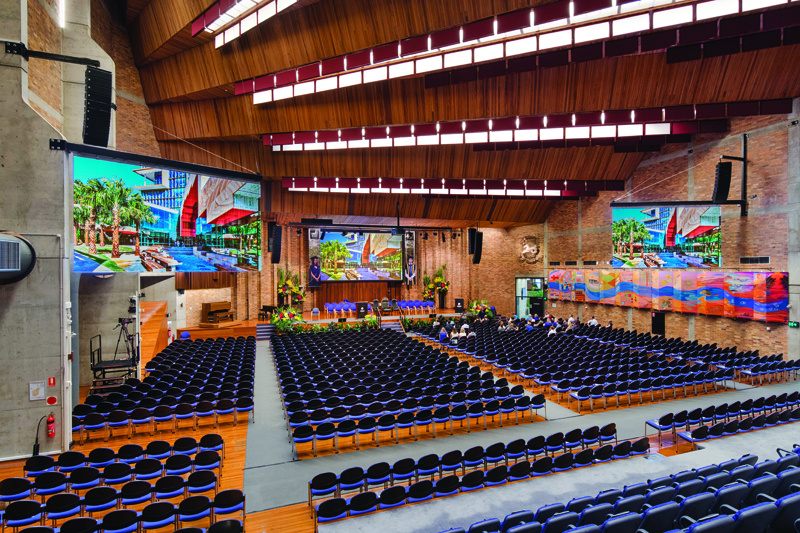 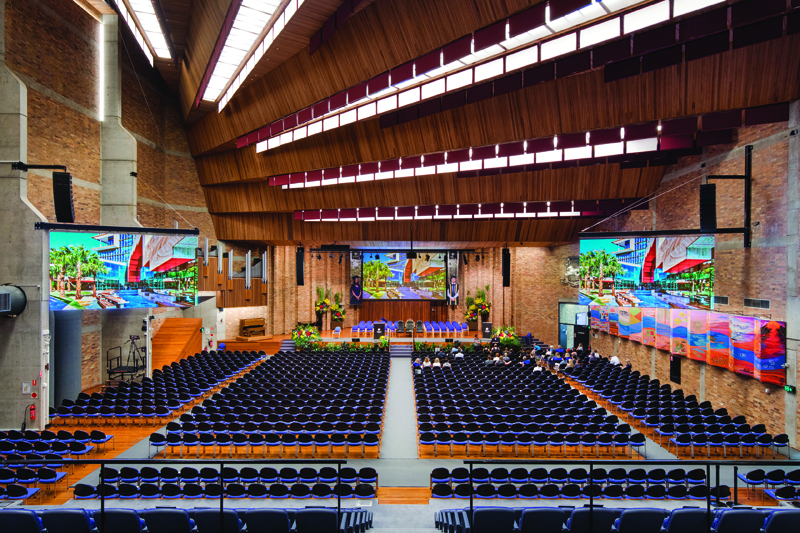 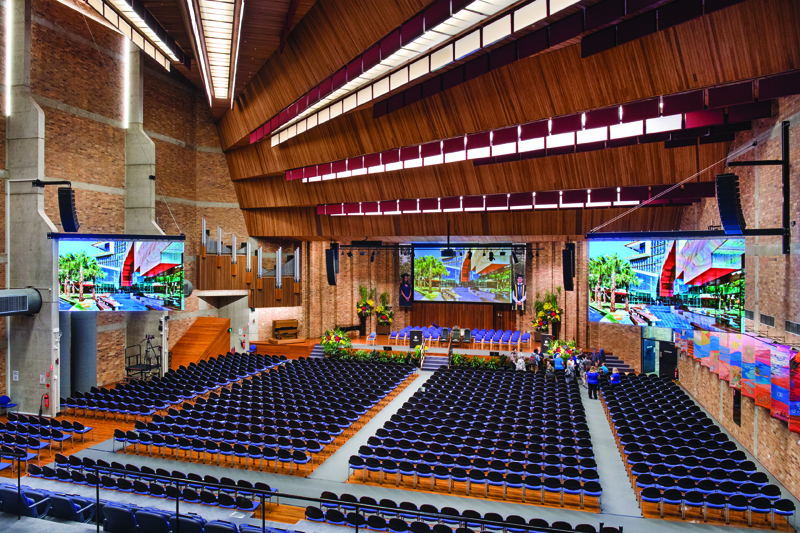 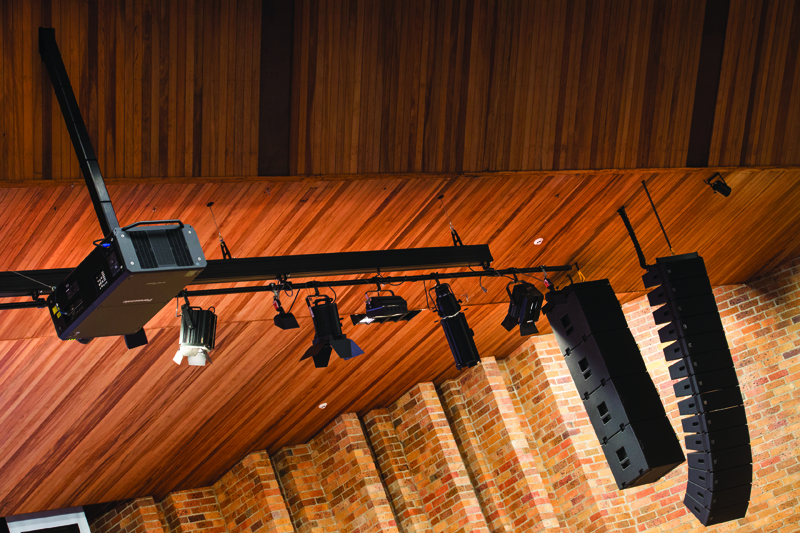 The tight timeline faced by the team was the single biggest challenge when it came to the project – and this was exacerbated further through the lack of existing architectural drawings.

The previous audio was inadequate for the room and unreliable, it was absolutely paramount that the audio issues be overcome since that was first and foremost the reason for the upgrade. Due to so many complaints, external companies were usually hired to provide temporary solutions to overcome audio issues, but this was understandably unacceptable.

The space is around 50-metres from front to back with a stepped ceiling, making it quite an awkward setting for the work needed. Some areas have 20-metre high ceilings, with a combination of concrete, brick and timber surfaces.

The 3D drawings allowed us to produce detailed audio mapping and models in order to determine speaker placement, as we had hundreds of kilograms of equipment to hang from the ceiling, a structural engineer was engaged to examine the facility and tell us what we could and couldn’t attach to. There were a number of factors that led to InDesign specifying Martin Audio for the audio system after reviewing, and rejecting, several other premier brands. In the first instance, the client had a previous Martin Audio installation that they were very happy with, and secondly, we trust the brand. It provides a value for money solution and they were able to offer a system that was fit for purpose, and which met our budget.

On top of that, the entire system is digital, so being able to incorporate the Martin Audio Dante foldback speakers integrated perfectly into the rest of the system.

Finally, there was the question of availability, since there was an extremely short time frame to deliver the project. Martin Audio assured us that the deadlines were able to be met. The main driver was the support from TAG. Tony, Ewan and Bryan were always available to provide the technical expertise required to deliver this complex project, from design, all the way through to installation and commissioning. The TAG team were there every step of the way.

The biggest challenge had been the architectural space, the room had lots of reflective, non-symmetrical surfaces. The rear wall has one side that is angled and cuts into the raked seating so if we were to try and hit the back seat in the middle, a lot of energy would have been reflected back into the audio area. This is why a large delay system was employed. We used the main FOH arrays to cover the floor seating, and the delays were flown out wide, angled down and inwards to minimise the reflections from that rear-angled wall.

Being able to optimise the arrays in the vertical plane using Display meant we could keep these interactions between these two systems to a minimum. The steering was so good that we could sit in the back row with great high frequency extension and intelligibility, and when we stood up it was a completely different story.

The original plan was for a custom tapered column array that could try and match the throw of the main WPM arrays. As is the case with line arrays, the low frequencies fall off faster than the high frequencies so we needed to try and get a tall line of spaced subwoofers to combat this. The university unfortunately wouldn’t go with this plan due to the look of the arrays, so we had to settle for smaller subwoofer arrays flown behind the main WPM arrays.

While this system does get used for music performance, speech intelligibility was its primary concern, so this ended up being an appropriate compromise.

A number of other areas within the venue were upgraded in terms of technology, with the visual element seeing huge improvements. A full LED display package from Novastar was installed with four VX4S LED processors, as well as two LED receivers and two LED displays.

With a can-do attitude, 10 months of meticulous planning and an install period of 18 days, the University of Newcastle made a generational upgrade to the audiovisual facilities in its Great Hall.

The aging and unreliable analogue solution was transformed into a world-class, modern, digital solution befitting of the cultural significance of the Great Hall to the University and local community.