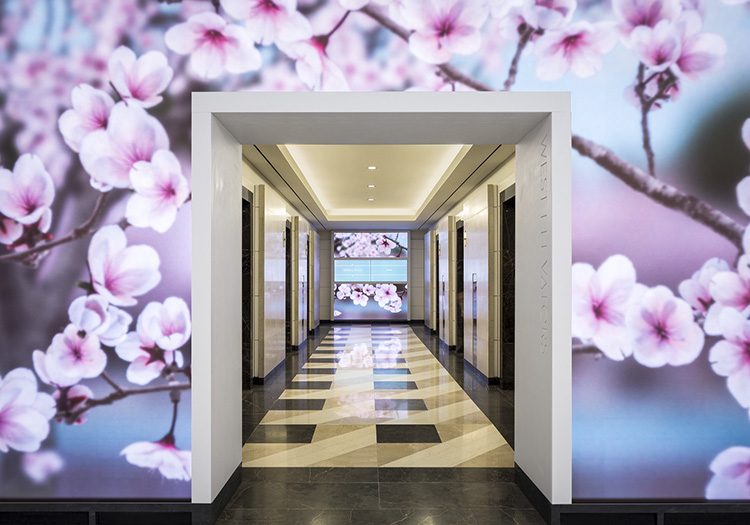 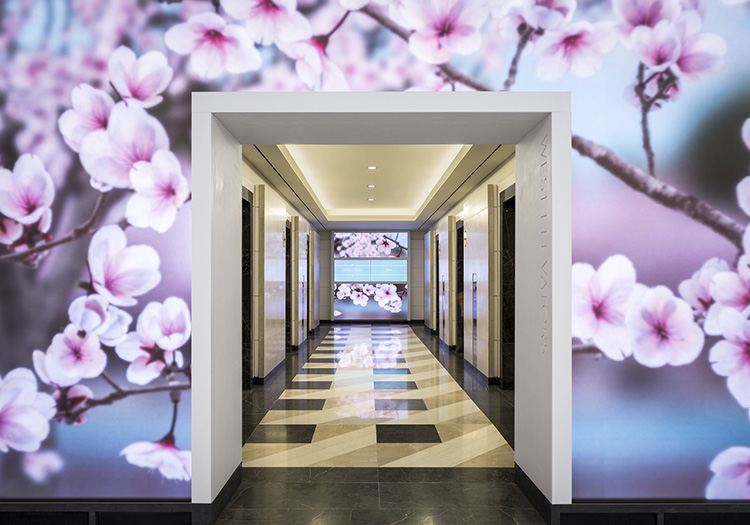 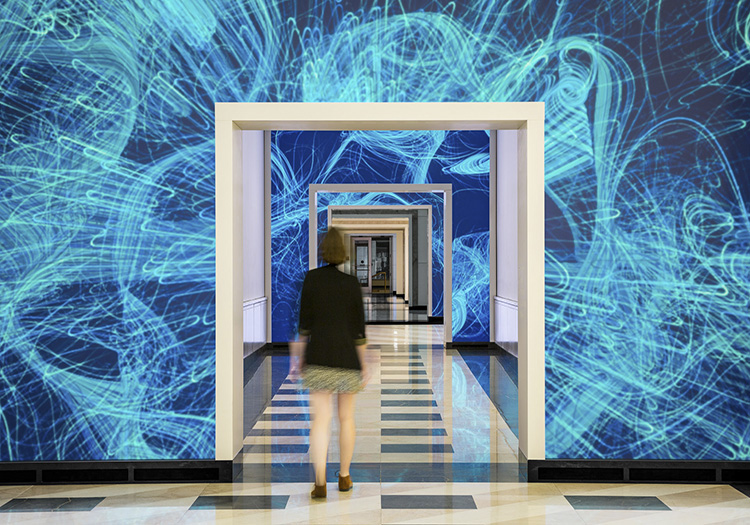 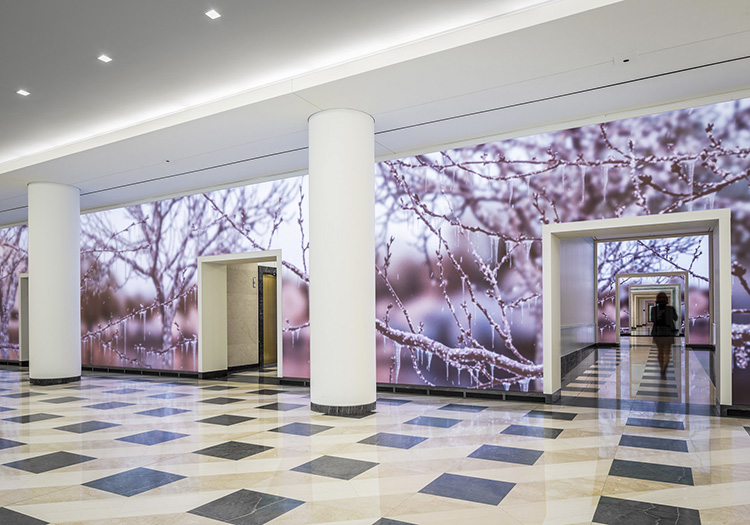 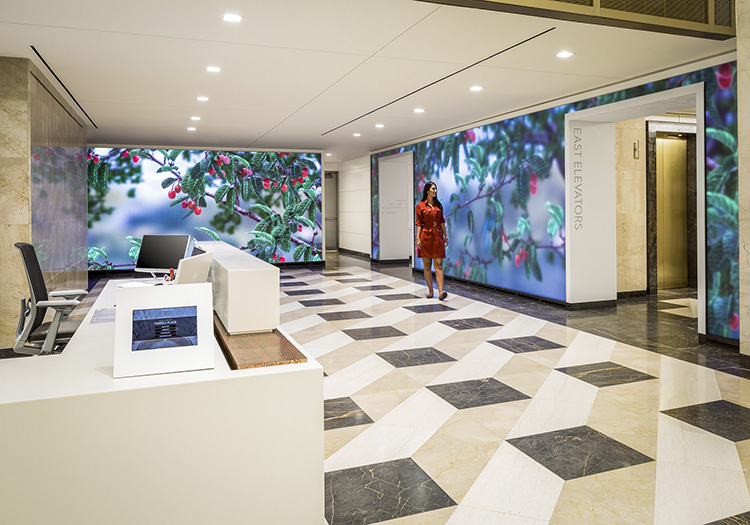 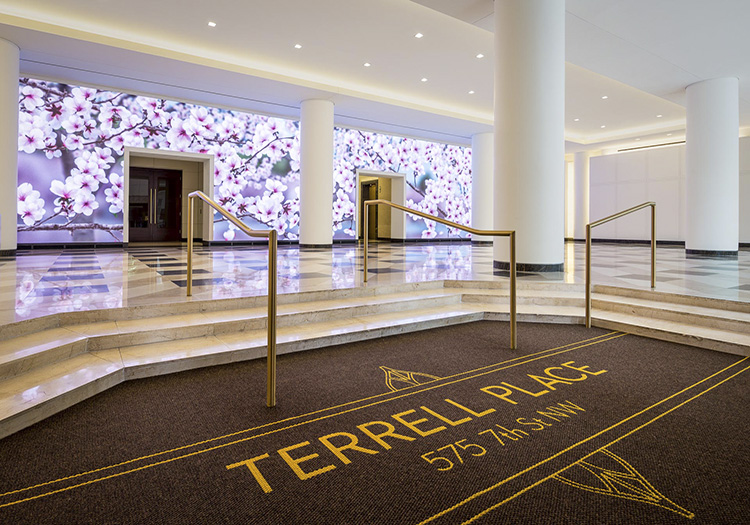 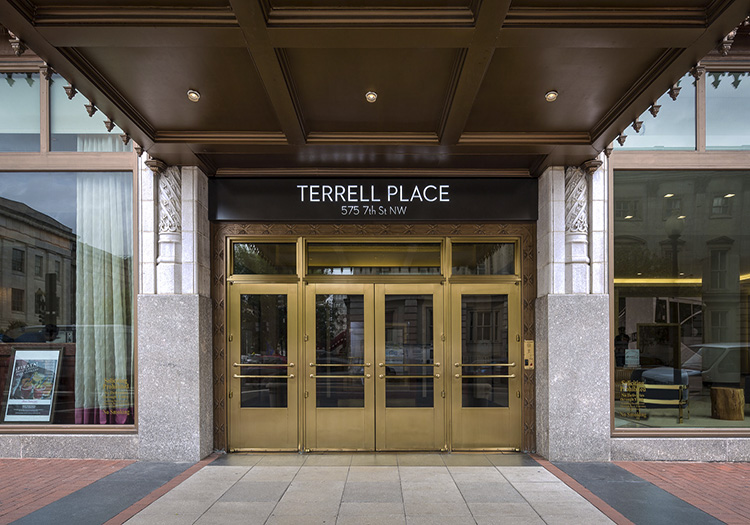 In this project the lobby of Terrell Place in Washington, DC, owned by Beacon Capital Partners, was transformed with a 160 m² motion-activated media wall. Technology and media are seamlessly integrated into architectural surfaces, creating an ever-evolving artwork that captures the pulse of the building.

The huge Gerriets’ FROST diffusion film canvas, combined with ESI’s design, converts the expansive first floor lobby space into a single media canvas. By installing large-scale, reactive media on lobby walls and corridor portals, a sense of connection across the building’s common areas is achieved. At 25m wide x 4m high, the largest media wall is capturing the attention and curiosity of passersby, who can see it from outside through oversize windows.

Highlights of the media include:

• Diffused LED wall displays in the main lobbies and corridor are activated by passersby via an infrared camera system, creating beautiful scenes that ebb and flow with the morning rush and the afternoon lull.

• The displays include three content modes – ‘Seasons,’ ‘Color Play,’ and ‘Cityscape’ – offering a selection of scenes that can be programmed with varying durations and sequences, ensuring that tenants never see the same scene even if they arrive and leave at the same time every day.

• The ‘Season’ mode shows the lifecycle of the iconic Washington, DC cherry trees. In the ‘Spring’ phase, as people pass by the screens, their movement causes the trees to blossom until eventually their petals fall off; when people pause in the lobby, they trigger butterflies to flutter.

• ‘Color Play’ shows algorithmically-generated patterns of multi-color threads which spread across the walls, weaving a tapestry that reflects the activity of Terrell Place.

• ‘City Scape’ pays homage to the city of Washington, DC with iconic architecture, statuary and transportation scenes that are brought to life by people passing by.

Unlike the interactive installations commonly found in shopping malls or museums, the visuals are not projected onto the wall plane. Rather, Terrell Place’s walls are covered with approximately 30.000 LEDs per square-meter, for a total of nearly 5 million LEDs over the project’s entire 160 square-meter installation. The 5-millimeter-diameter diodes are installed behind an acrylic diffusion layer by Gerriets called FROST diffusion film. An air cavity between the LEDs and the surface of the lobby wall ventilates the diodes, keeping them cool and running efficiently.

Display is controlled remotely by ESI, which uses the cameras to monitor activity in the lobbies. The firm is still experimenting with the programming, but the templates generally mimic the rhythm of activity in the space; for example, “Color Play” may be on during times of transition such as the beginning or end of the workday. In the evenings, ESI may run darker-colored content to save electricity since the energy consumption of installation correlates with the brightness of the display, Schneider says. The wall powers down around 11 p.m.

Terrell Place is named after civil rights activist Mary Church Terrell, a founding member of the NAACP who, in 1951 at the age of 87, led a sit-down protest against segregation at the lunch counter of the then-Hecht’s department store.

Ambient music accompanying the dynamic scenes was composed by Bruce Odland, a sound artist based in Westchester County, N.Y., who compiled sounds of nature, the city, and pieces that Terrell has cited in her book, A Colored Woman in a White World (Ransdell, 1940), as being influential in her life, including Felix Mendelssohn’s “Elijah” and Samuel Coleridge-Taylor’s “Deep River—24 Negro Melodies.