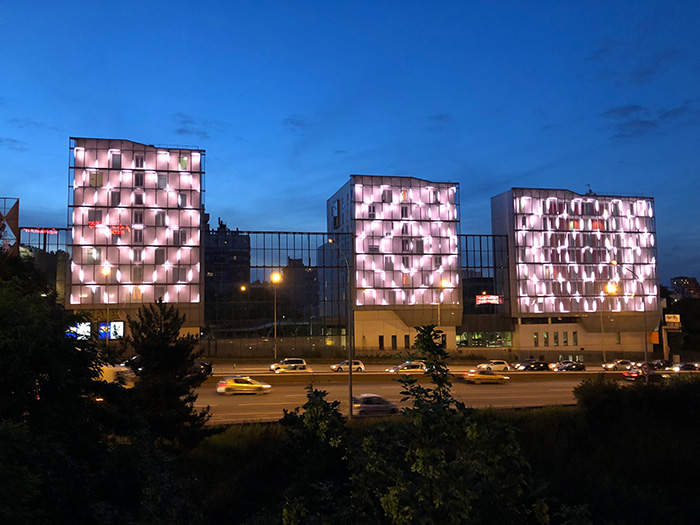 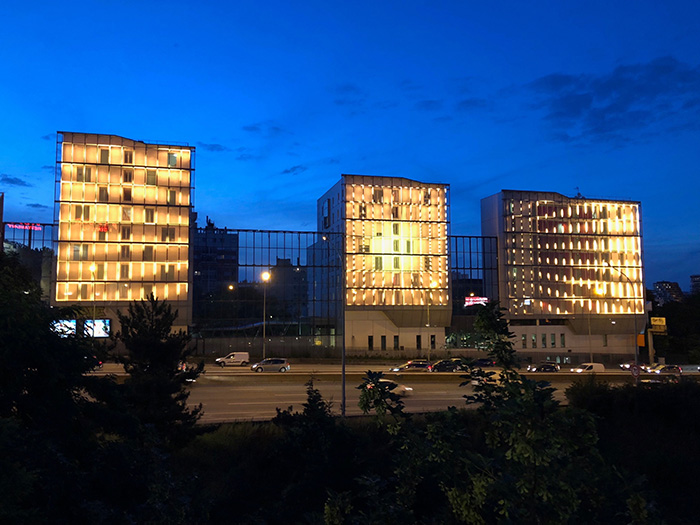 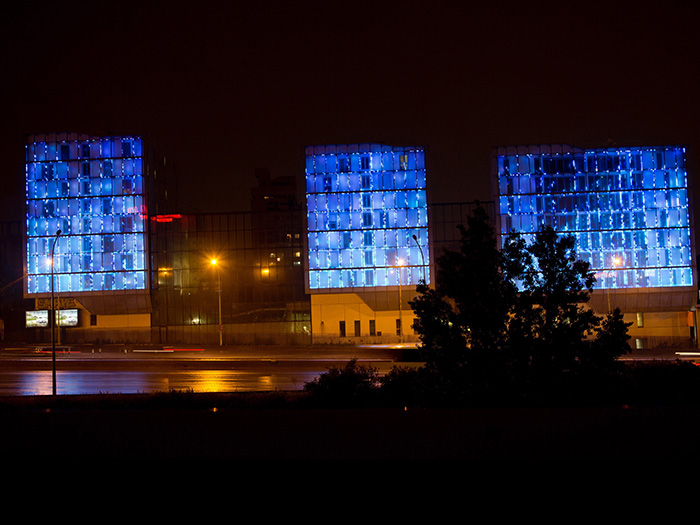 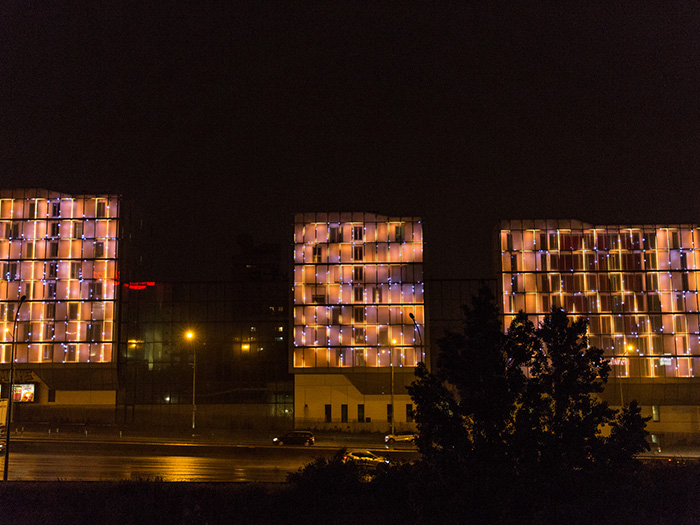 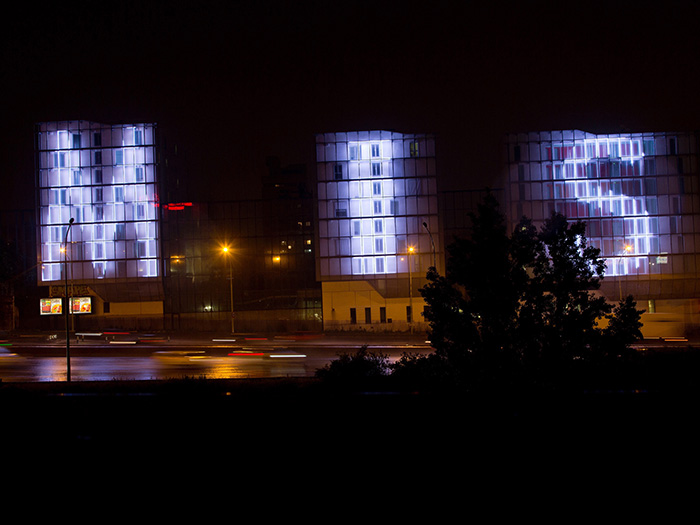 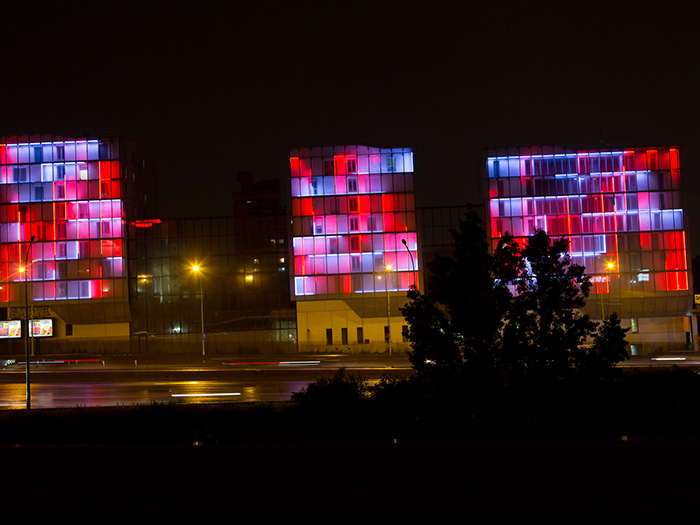 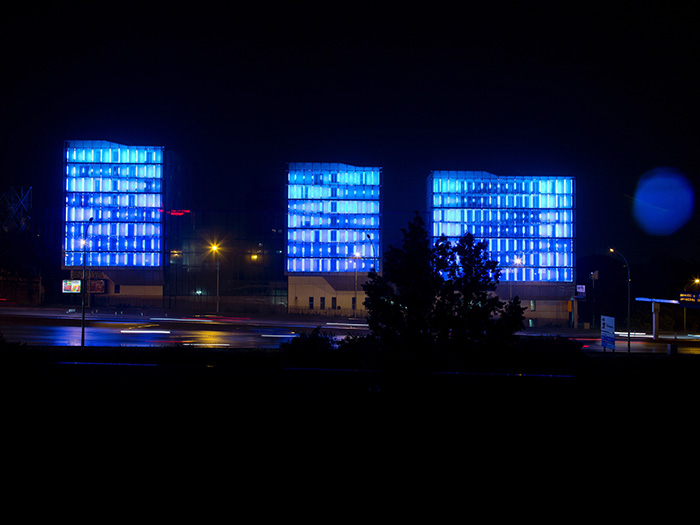 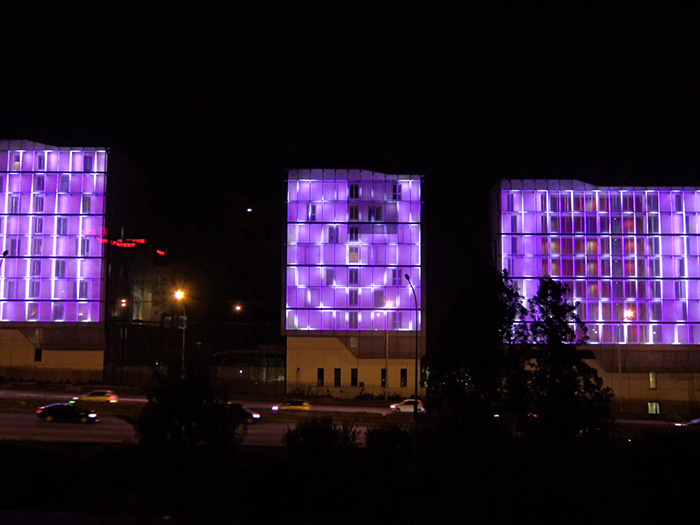 In the thirteenth arrondissement of Paris, the capital of France, the facades of the ‘Maison Internationale de Séjour’ were transformed into a luminous tableau intended to become works of art to embellish the city, reinventing the concept of ‘The City Of Lights’.

When walls are transformed into giant screens, when buildings become a new medium, when the light becomes an architectural element in its own right, then an unprecedented artistic creation becomes reality.

A technological feat has made all of this possible. All in all, no less than 25,664 LEDs illuminate the facade of the MIS, which requires a total of 76,992 DMX parameters. Especially the large illuminated area of 1,025 square meters makes this lighting installation a unique project. A three-building front acts as a single screen that is about 58 metres long and 18 metres high.

From the moment they were designed, the three buildings have been equipped with a second shell made out of glass. The framework uses translucent walls in order to benefit from the transparency, and to bring out the soul of the construction.

The exterior consists of 284 glass panes, which are all surrounded by LEDs. Due to the architectural characteristics, the fixtures had do be custom made in order to equip the windows with either 82, 88, or 94 RGB pixels. The way the LEDs are placed provides a visual display that is worthy of a screen. The positioning of the LEDs, related to the artistic design of lighting designer Fabrice Azoulay, makes effects possible that have never been seen on building facades. The visual expression includes a multifaceted mix of effects, graphics, and videos. But the sophistication takes on another dimension by controlling all of these LEDs with a pixel-mapping server. Controlled collectively or separately, they can serve all possible imaginations, may it be in terms of effects, lighting intensity, or choice of colours. That is why the possibilities for creating visuals are limitless.

Depending on the news, the weather, or the imagination of the designer, the facades of the three buildings will change. They can repeat the same message, or variants, show specific information each, or they can simply reproduce pre-programmed images, visuals, and effects.

All this is made possible by the products used: 75 DiGidot C4 drive 1704 customised DiGidot T-Series PixelsStrips, all controlled by 1 MADRIX 5 KEY ultimate pixel mapping software.

Located next to a busy six-lane highway, there was a single yet paramount challenge to overcome: to not blind all the drivers. The solution to this problem was strictly placing the LEDs in such a way that they are only illuminating the glass.

Paris By Light is an innovative project, urban and futuristic, with a limited ecological impact. It is the largest installation of its kind in France. And it features a contemporary and at the same time unprecedented artistic design for effects on lines of LEDs.