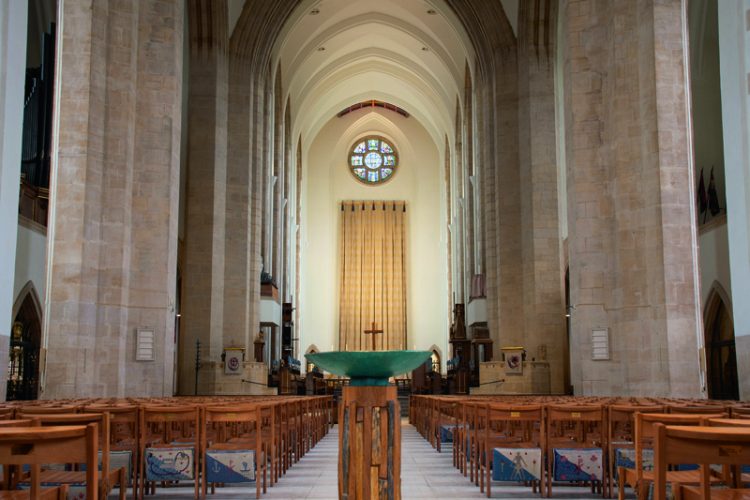 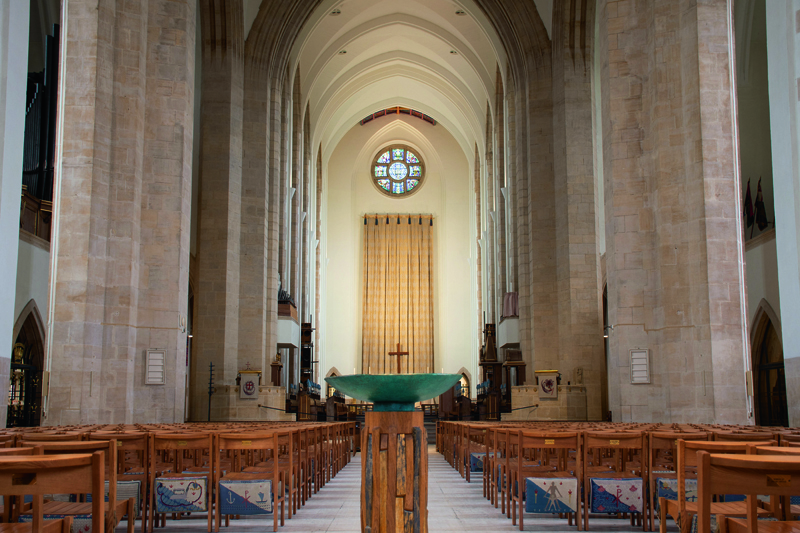 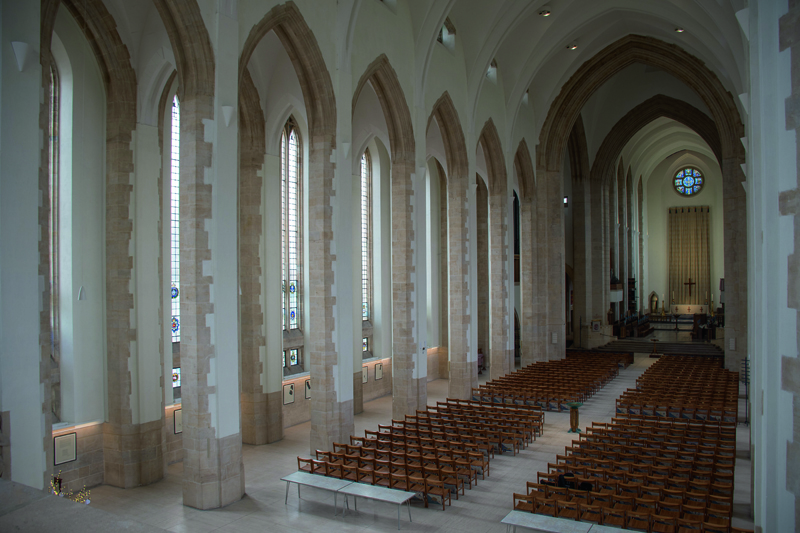 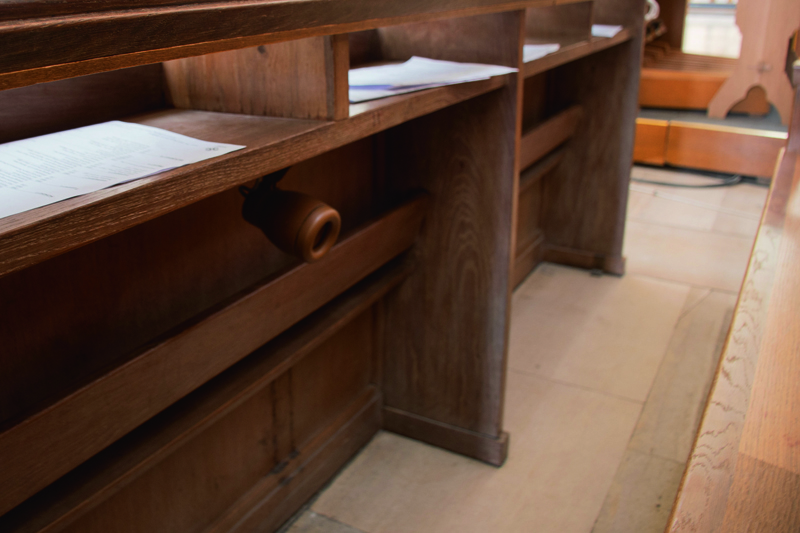 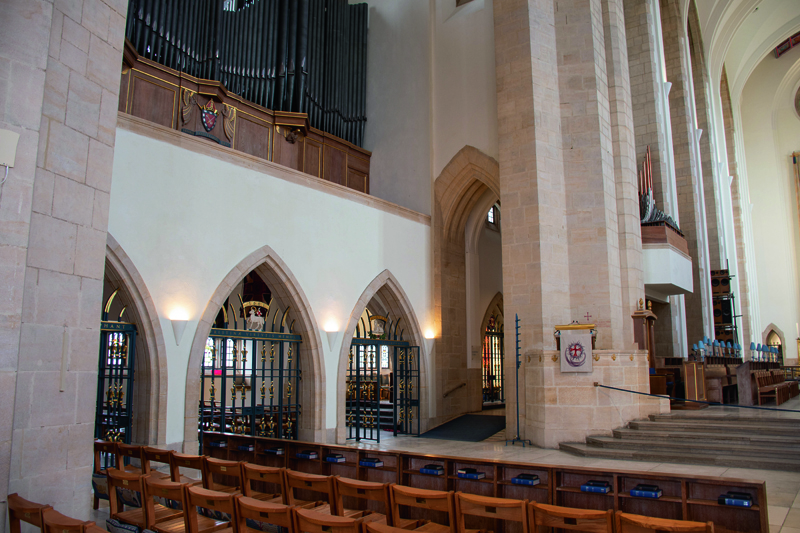 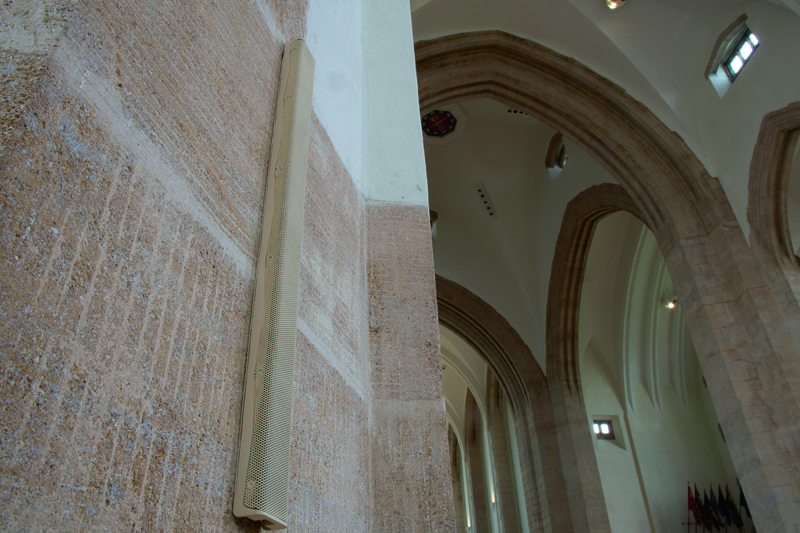 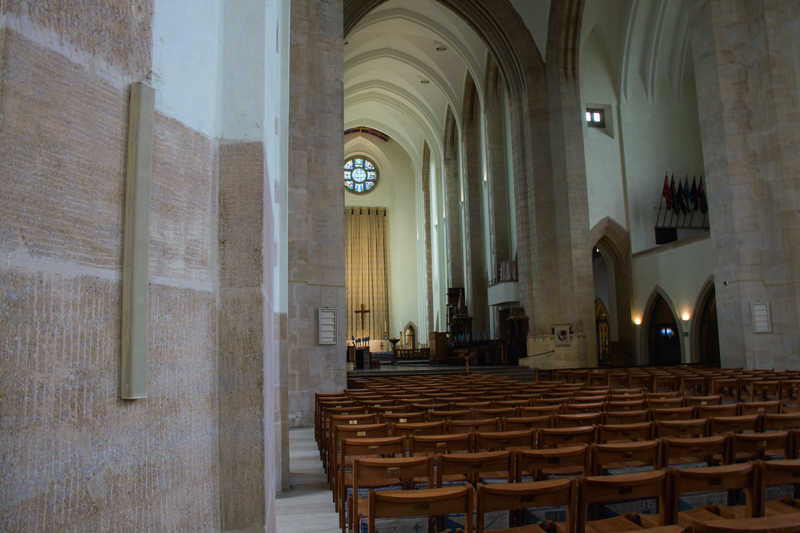 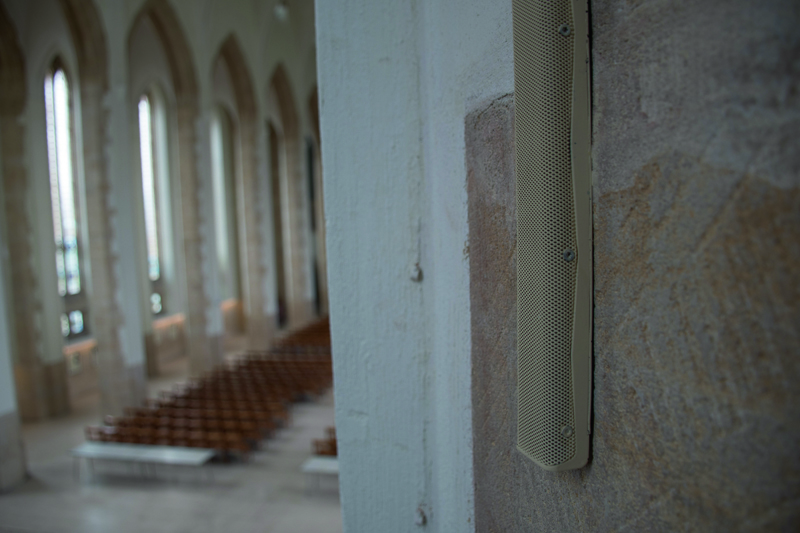 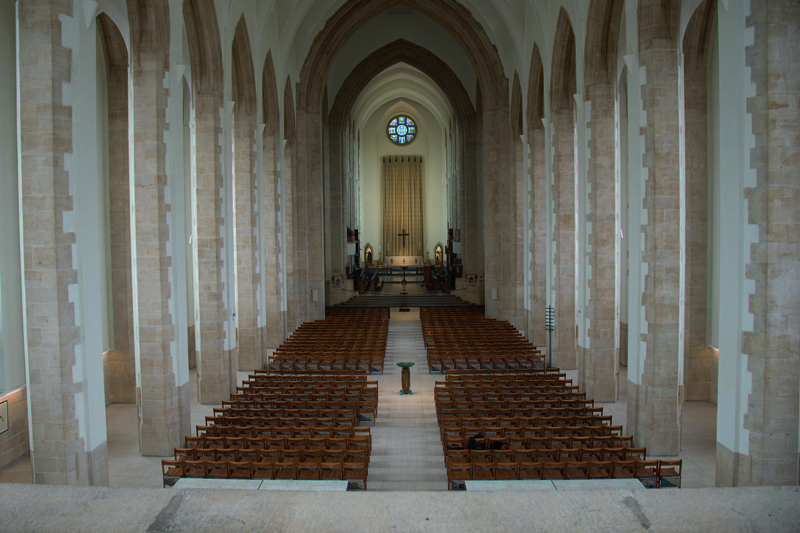 A visually minimalist K-array loudspeaker system from the Italian leader in inspirational design has been installed at Guildford Cathedral as part of a major upgrade of its audio systems. Supplied and installed by DM Music, the Vyper ultra-flat line arrays deliver exceptional intelligibility from the discreet, colour-matched enclosures.

Guildford’s Grade II Cathedral occupies a commanding position on Stag Hill, overlooking the town and its University. Designed by British architect Edward Maufe, it is one of the UK’s more modern worship spaces and one of only three built in the 20th century. Construction started in 1936 but was halted by the outbreak of war, and only resumed in 1954. Towards the end of 2017 the cathedral’s technical staff decided to replace the outdated 100V line loudspeaker system that was no longer up to the task.

They approached Harpenden-based DM Music, one of the UK’s most experienced specialist church systems integrators, to tender for the audio design project. As part of the upgrade it was also necessary from a health and safety perspective to remove the asbestos-based acoustic plaster that was lining the 22 metre high, 1,000 square metre ceiling, and as a result the building acoustics presented the installer with a sizeable challenge.

DM Music’s Installations Director Graham Bennewith explains that “removing the plaster made things substantially worse for us, so we had to design a speaker system that would be intelligible even with a subsequent RT60 reverb time of around 6.5 seconds!

“As well as presenting a difficult acoustic environment, like many of our Grade I and Grade II listed churches aesthetics was also a major consideration. The advantage that K-array has over other speaker manufacturers is that not only do their installed products sound great in an environment such as this, they are also very discreet, and we were able to RAL colour-match to the stone work to make them virtually invisible,” he says.

The Vyper KV50 column arrays installed in the nave consist of eight closely-spaced 1-inch drivers in an elegant stainless-steel chassis, providing focused listening from the inward-facing pillar locations. Their narrow vertical dispersion and wide horizontal coverage pattern ensure that sound is directed solely at the congregation and away from reflective surfaces.

The loudspeaker system was modelled in EASE and, says Bennewith, “2BHeard’s Dave Wooster provided detailed acoustic simulation, and his expertise in preparing the complete EASE project for us was invaluable.”

In addition to the sixteen KV50s covering the whole of the nave, eight KU44 colour-matched subwoofers are fixed on the outside of every other pillar, complementing the mid-high speakers to provide full range frequency response.

In the crossing a pair of KV50s point back towards the Quire to fill in for the front few rows. Tornado KT2 spot monitors are installed under the choir pews; this location is also the control point for the whole system – equipped with a fixed iPad, a mobile iPad so the vergers can walk around and assess sound quality, a CD player, and a recorder. An additional pair of KV50 speakers fire up towards the presbytery.

“The cathedral is used quite extensively by the University of Surrey, and they have a lot of concerts in here,” explains Bennewith. “For a graduation ceremony for instance they will bring in a video that’s been designed for a full range system, so the subs enable us to give them full range response. For speech the subs aren’t essential but they do add a bit of presence at the bottom end.”

He continues: “To complete the loudspeaker setup, there is another pair of KV50s with KU44 subs projecting sound to the high altar. We’ve also installed a feed into the choristers’ practice space to allow them to hear what’s going on while they’re getting ready, while in the West Porch we’ve got KT2s to provide some in-fill, and in the West Gallery we’ve also installed KV50s.”

The supporting electronics infrastructure is complex, says Bennewith. “At the heart of the system are two Dante-enabled Yamaha MTX5D processors – one in the loft and one in the basement. Everything in the East End all wires down to the basement, which is then linked on Dante to the processor up at the top, all through 10mm conduit. Radio mic receivers are up in the top, and from the MTX5D we feed to the K-array amplifiers, which are mostly KA24s.”

“The choice of K-array was a simple one,” he says. “Every year we look for speaker brands, we go to the trade shows and talk to as many manufacturers as we can. We did consider larger steerable arrays for this project, but the result is not as aesthetically pleasing. In terms of matching the building, K-array is really the only brand that can do the job.”

The cathedral’s Director of Operations Matt O’Grady agrees the building provided some challenges. “Naturally it’s a work in progress,” he says. “People need to get used to the loudspeaker system together with the new acoustic; and we’ve got to please every one of the congregation sitting in every seat, so we are constantly looking for dead spots and tuning those out. Now that the acoustically absorbent plaster has gone, the acoustic has got a lot livelier and so people need to temper their speech accordingly.”

“So far, we’ve had some very good feedback,” says Bennewith. “Our contract includes one year of technical support and that means regular tweaks, so I regularly meet with members of the church to work out if there’s any dead spots, and fine tune all the delays and settings to their exact requirements. They’ve asked for some zones to be slightly louder and some to be slightly quieter. We plotted it completely flat, so we could we have a bit more in this area and a bit less in this area, and that’s down to their personal preference.”

“I think Graham’s done a fantastic job.” O’Grady concludes. “We’re very pleased with the equipment – the aesthetics are brilliant, the speakers are a lot smaller, and they’re far less obtrusive.”