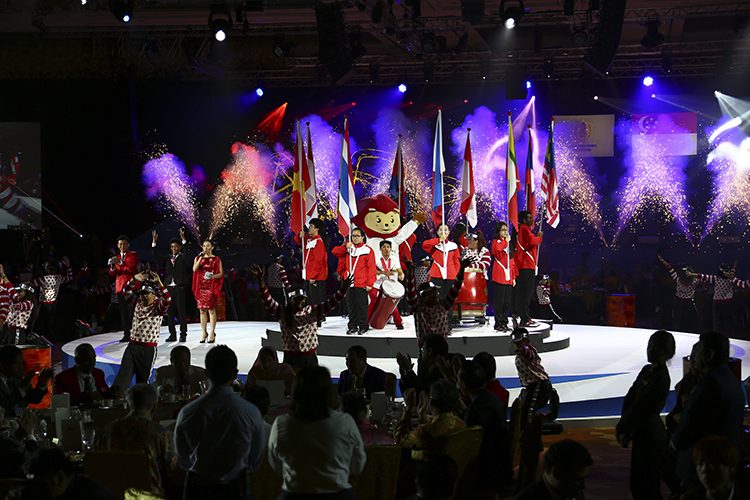 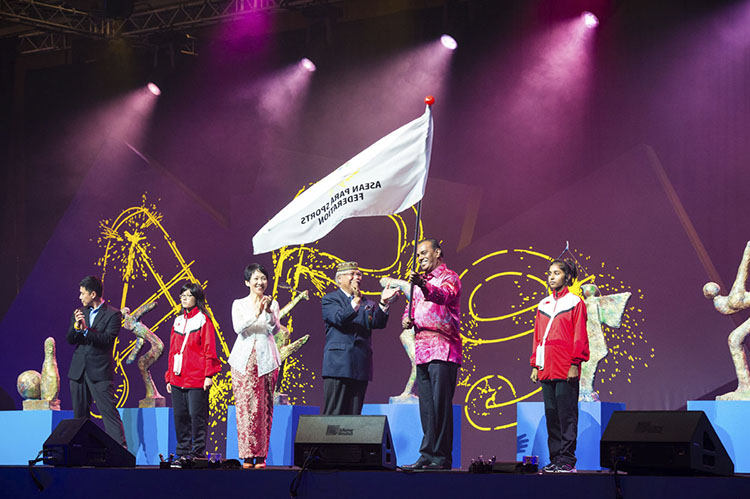 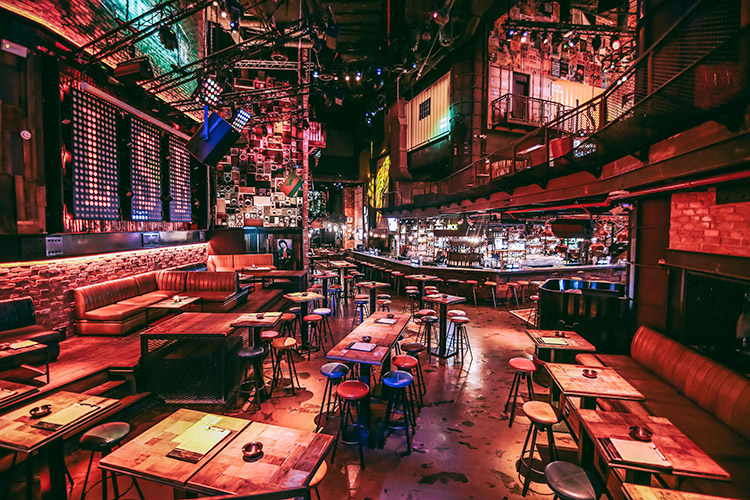 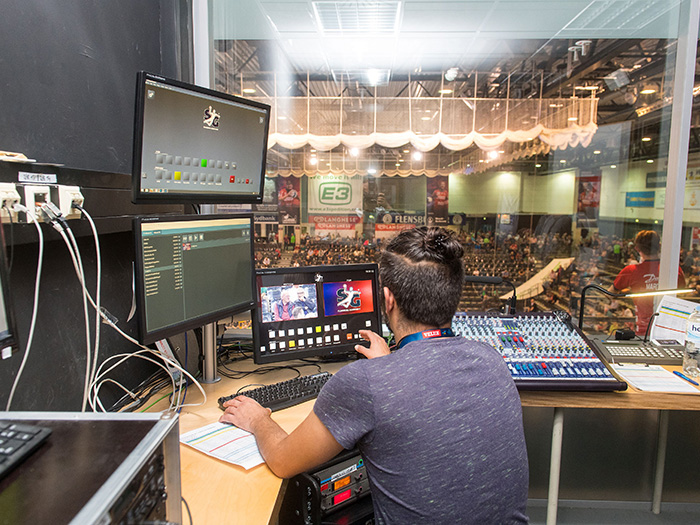 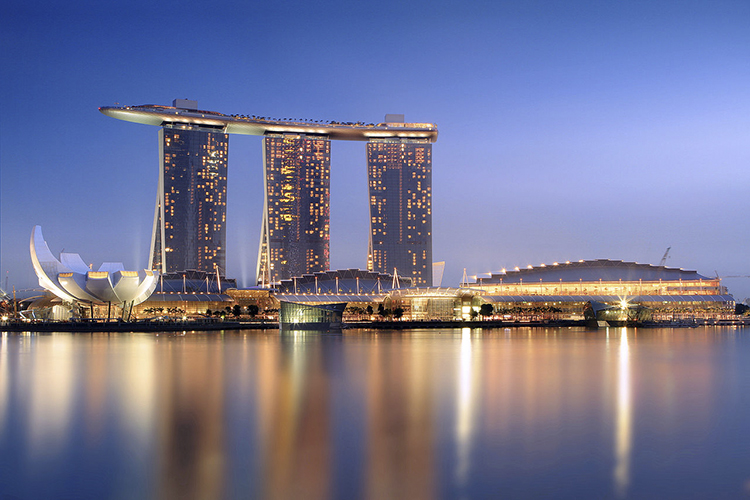 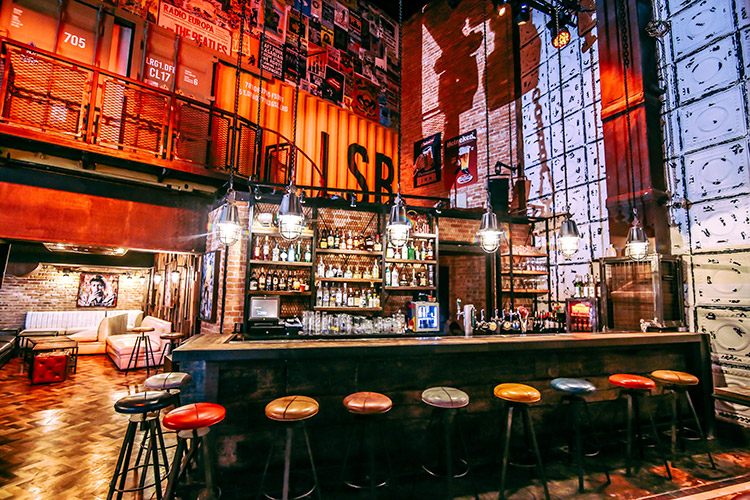 Known as Campus Halls until 2012, the Flens-Arena is a multi-purpose venue in the town of Flensburg/ Germany. It is located on the Flensburg University and College campus. Only half-jokingly called ‘hell of the north’ by handball fans the Flens-Arena is where the home games of the DKB Federal League handball club SG Flensburg-Handewitt are played. With 1.500 places it has got the largest standing area within the Federall Handball League. Operated by the Flensburg-based fördeshowconcept GmbH, the Flens-Arena is not only used as a sports venue but as an event location too, for concerts, university festivities, fairs, and exhibitions.

Hence Campus Hallen GmbH entrusted Amptown System Company with the job of renovating the video equipment and direction facilities, which had become obsolete over the years. With customer and ASC knowing each other well from the time when the Campus halls were built and when ASC had implemented the sound and lighting equipment, it seemed logical to resume the excellent cooperation of the past for the new project of modernizing the projection equipment. ASC media engineering experts Moritz Lübcke and Sebastian Kirsch were responsible for consultations with the customer and the technical management of the project. The client wanted modern video walls which were supposed to be as failsafe and low-maintenance as possible while meeting the latest technical standards as a matter of course.

The two obsolete four by three rear projection walls were removed and exchanged for new high-quality state-of-the-art LED projection walls. In fact ASC took charge of everything in a one-stop operation – from mechanical planning of essentially the rigging and rigging gear to electrical planning, from carrying out the programming including that of the CMS (content management system) to providing the playout software. ASC services further extended to fitting and installing the LED walls, setting up the video direction unit and connecting it with fibre optic cables, and eventually commissioning the system as a whole. The system integrator selected two Absen LED walls five by three metre large with an image format of 16:9 and a pixel pitch of six-mm onto which the handball home games of the SG Flensburg-Handewitt would be projected, and supplied rigging and motors as well.

Used for promotion, graphics, live video images, and score displays while the SG Flensburg-Handewitt is playing its home games, the LED walls are a means of communicating with the spectators in a direct and very effective fashion. As a basic requirement for any handball game to proceed without disturbance, maximum reliability of the scoreline display is safely ensured.

The equipment of the video direction unit was supplemented with a feed server involving a Christie Pandora’s Box, a Christie Widget Designer and a CMS developed by Amptown System Company to enable content, live video images, and the existing scoreline display to be mixed during live operation and to be projected on the LED walls in various selectable screen configurations.

Along with modernising the projection walls ASC advised the client on how to involve digital feeds.

The client agreed that purchasing a new playout system and CMS would substantially enhance the service provided to the audience and thus constitute a wise investment indeed. Incorporating the existing video feeds (score system, analogue video mixer) some of which were still based on earlier standards into the new media server CMS system without having to replace all of the analogue signal peripherals represented a particular challenge the ASC system specialists coped with successfully. Now the SG Flensburg-Handewitt video direction crew is able to change content any time via the CMS without having to request technical support.

ASC project manager Moritz Lübcke said: “Having discussed requirements with both the customer and the user, ASC configured an up-to-date video system and converted the former analogue system to a modern digital one. The main challenge was to incorporate the existing video feeds including the score feed some of which were still based on earlier standards and the analogue video mixer into the new media server CMS system without having to replace all of the analogue signal peripherals. We came up with an intelligent solution which enables the video producing and directing crew to change content themselves any time using the CMS with no technical support required.”

His ASC media engineering colleague Sebastian Kirsch added that “the project represents the ASC credo ‘everything from a single source’ in the truest sense of the word: from designing the mechanical components such as the rigging and rigging gear we carried out all of the work required. The electrical planning, the installation of the LED walls, the installation of the feeding equipment in the direction centre, and the commissioning of the complete system. Electrical planning involved general programming, programming the Content Management System (CMS), providing the playout software and of course the complete optic fibre cabling and the connection of the direction centre.”

The customer is more than satisfied and that’s what it’s all about. Jan Kühl of the marketing & sales / match day organisation department of the SG Flensburg-Handewitt commented on the use of the new video equipment: “The LED walls play an important essentially communicative part during the handball home games the SG Flensburg-Handewitt plays. The show in the hall is transmitted via the monitors. One hour before the actual match starts, the live picture camera presents blocks welcoming the spectators, introducing new players, and announcing players’ birthdays. Advertisements are displayed as well as interactions with the spectators. About 15 minutes before the game starts a pyro show – referred to as the ‘hot phase’ – entertains the audience. Afterwards the screens will supply information, display the score, and again present live video images and commercial blocks. We are very happy that the new installations are such a success and that handling the new technical equipment is user friendly and fun.”