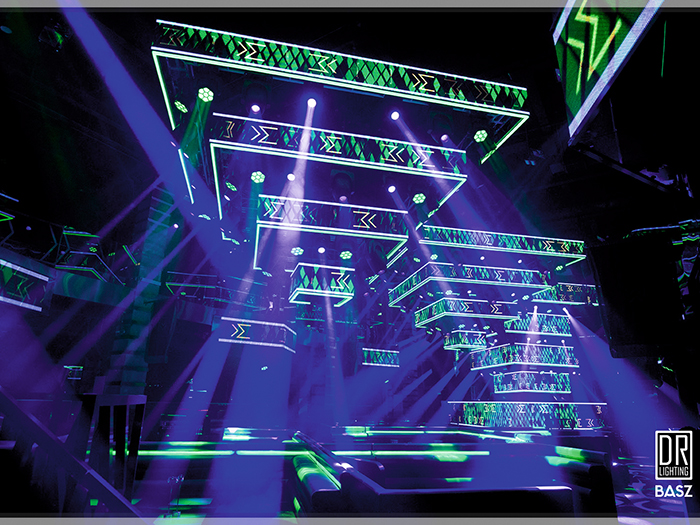 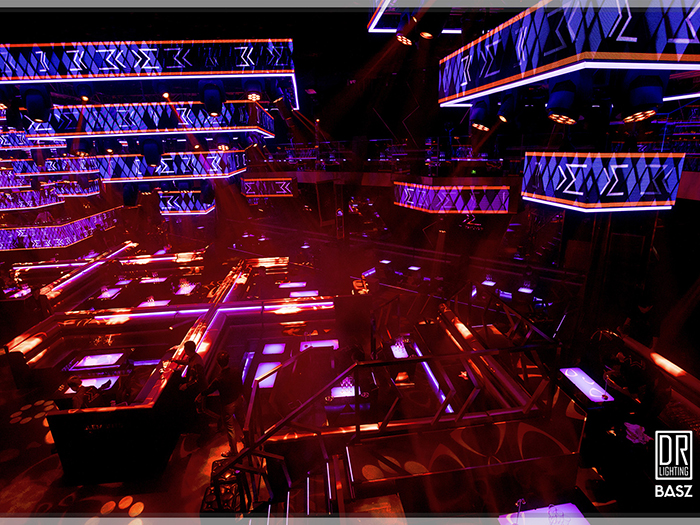 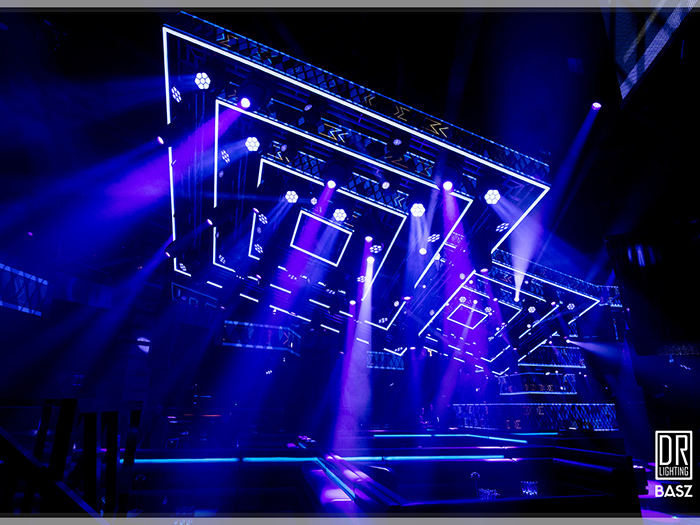 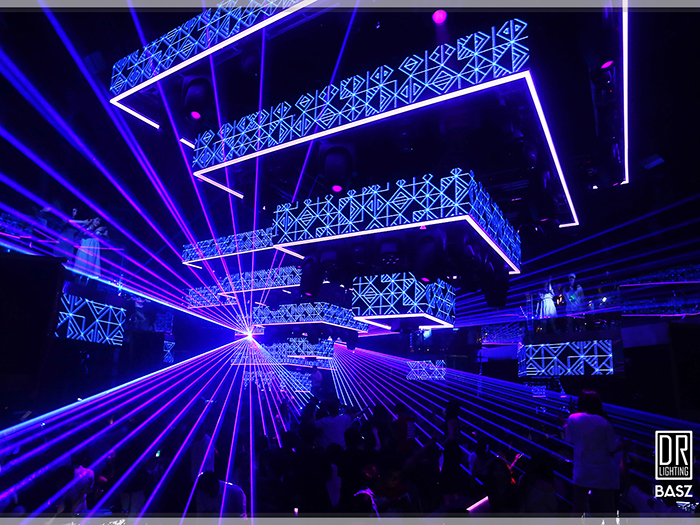 The lighting set up is designed to give the audience a 360° feeling” to make people feel that the entire club is one big dancefloor. The main configuration is based on four large squares of lighting, each with three concentric smaller squares inside.

We chose to keep it simple and use only three different types of moving heads for show lighting, one type of spot fixture, one type of wash fixture and one type of beam fixture.

With such an impressive setup and large number of fixtures, having too many different types of fixtures would become overwhelming. Every fixture type is used throughout the entire club, giving LDs the ability to use one fixture type at a time to light up the club.

All combined with a powerful LED strobe to give attention to specific accents in the music.

The visual set up is an important and integral part of the design, which follows the shapes of the set throughout the entire club. The 4mm LED tiles are mounted on the outside of every square and the entire balcony, to create a true 360° club feeling as people can watch the setup from every angle. This was one of the very important basics during our design process, to give the audience a real club feel, instead of feeling like they are watching a concert. The visual setup was perfected by a next level content package, custom made for Elements and created in association with our partner DVizion from The Netherlands.

From the very first moment we started designing, we wanted the setup to be able to move, to create high impact moments and have the possibility to refresh the look and feel during the night. We chose to use winches for movement of each square, giving the possibility of moving them all the way up to the ceiling, as the clearance of the club is only eight and a half meters. It was important to us that the LD could control the automation, so we configured it to be triggered via the GrandMA with safety controls on a separate console next to the GrandMA.

The main challenge was ensuring the vendors would install the setup as designed.

They were not accustomed to receiving professional drawings from the designers with detailed explanations in English and Chinese, so we had to watch them very closely to make sure our drawings were followed. As the design has important details, such as the position of the motion and height of the setup, following the design was imperative, so we had many video calls with Mark Zhang (the owner of the club) and his team, together with a visit on site during the installation process.

Elements Club has an original and detailed design. The shapes of our lighting and video design are repeated in the interior design throughout the entire club, it is wholistic.

We designed the whole club based around the light and video setup.

Elements Club is a beautiful, fresh, and engaging space. Our design incorporates technology into the architecture in a way that the technology becomes an integral part of the environment. You arrive in a timeless way, up a grand staircase and passing through multiple portals.Corridors and video walls create an ever-changing environment as guests enter the Club, which help set the tone and the wow factor for the main room.