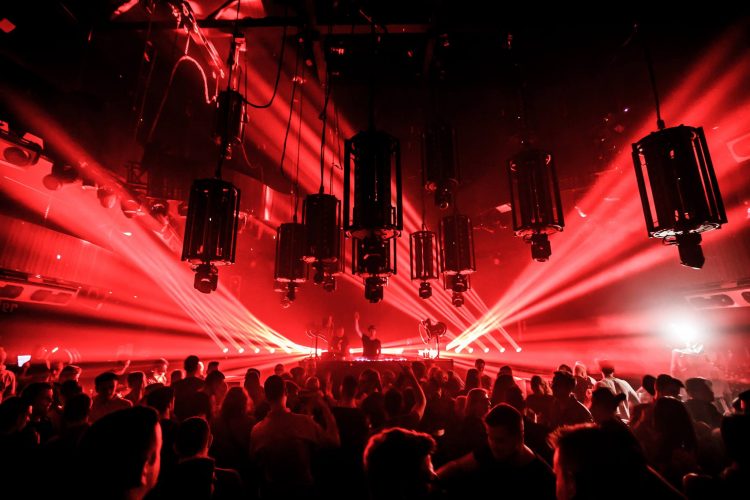 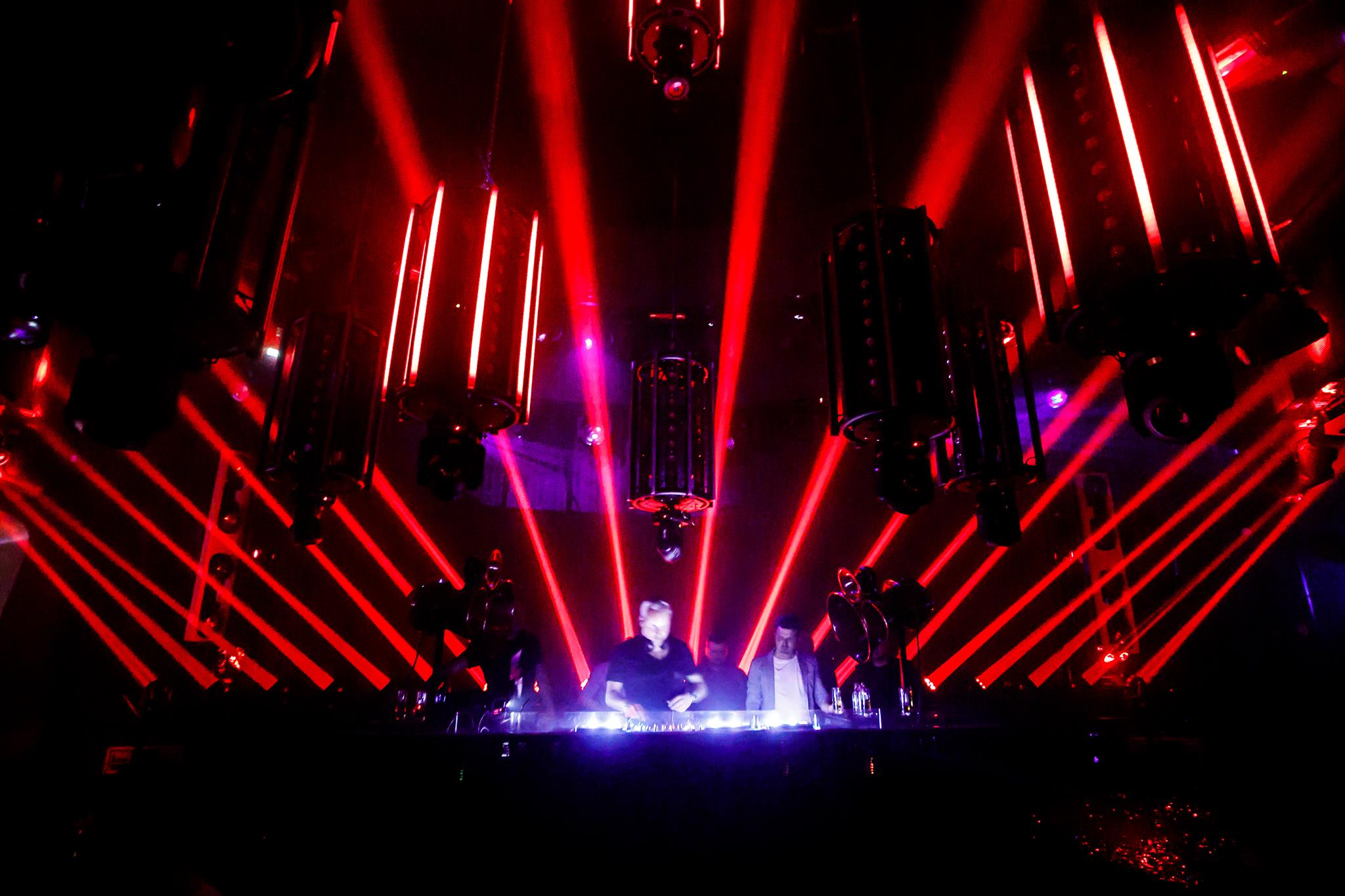 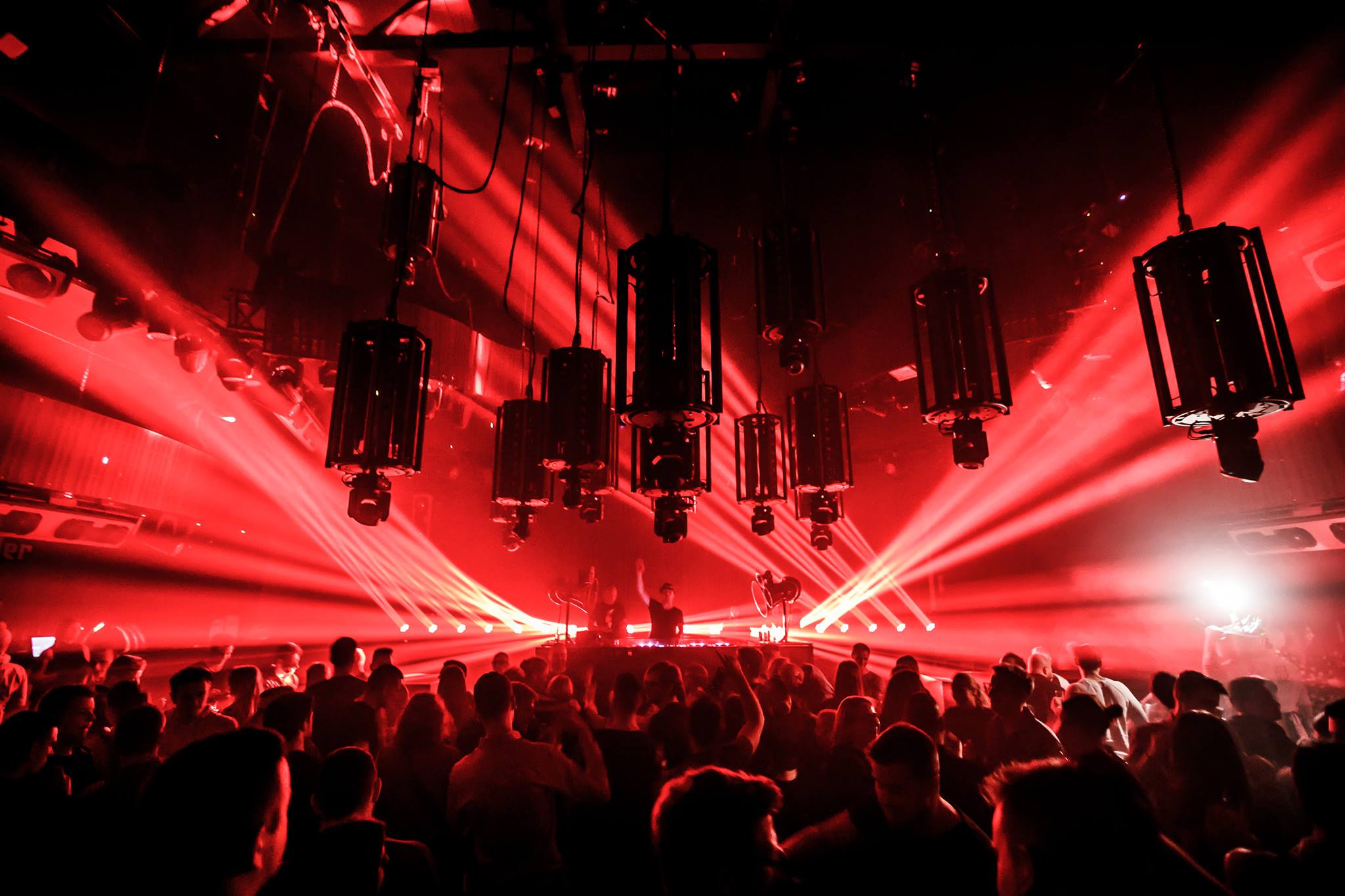 The design is based on round shapes, in order to get it playful and three-dimensional. The former oval shaped LED elements were re-used but replaced to create a more spacious feeling, the lighting set up is designed to make people feel that the entire club is one big dancefloor.

The main configuration is based on eight curved trusses of lighting, each with video panels in the front and for the area above the dancefloor. I’ve designed custom cylinders which can be moved in a vertical direction individually, each cylinder is equipped with four Highlite active sunstrip, eight Martin VDO Sceptron 10 and one Martin MH-10 Beam FX.

Every fixture type is used throughout the entire club, giving LDs the ability to use one fixture type at a time to light up the club. All combined with the powerful Martin Atomic LED strobe equipped, with Martin Atomic scrollers to give attention to specific accents in the music. Around the DJ Booth, Eurotruss HD44 circle parts were used to create an intimate feeling.

The visual set up is an important and integral part of the design, which follows the shapes of the set throughout the entire club. The 10mm custom curved LED tiles (Pixelscreen Belgium) are mounted on the outside of every curved truss, to create a true 360° club feeling as people can watch the setup from every angle. This was one of the very important basics during the design process, to give the audience a real club feel, instead of feeling like they are watching a concert. The visual setup was perfected by a next level content package, custom made for Versuz and created by Prismax from Belgium.

From the very first moment I started designing, Versuz General Manager Yves Smolders wanted the setup to be able to move, to create high impact moments and have the possibility to refresh the look and feel during the night. Versuz technical team created a remote-controlled system to control the hoists for movements. All curved trusses and the 24 cylinders can be moved in a vertical direction individually.

The main challenge during the installation was that the venue needed the possibility to be scaled down by moving the stage, without affecting the light and video setting.

Together with the R&D team of Fairlight, I’ve created a mono-rail system to move the circular trusses, above the stage, in a horizontal direction.

The technical team created a remote-controlled system that allows them to move the stage back- and forward to change the size of the venue.

Another challenge was that the setup needed to be installed within four days.

Versuz technical team, lead by Bert Gemels in co-operation with Fairlight, managed to dismantle the old construction and install the complete new setup within that time frame.

Together with one programming day on site, the club was up and running.

Versuz exudes a beautiful, fresh and engaging club where the design incorporates technology into the architecture in a way that the technology becomes an integral part of the environment.

Which proves that old elements of the club can be integrated into a new design to give the club a whole new look and feel.