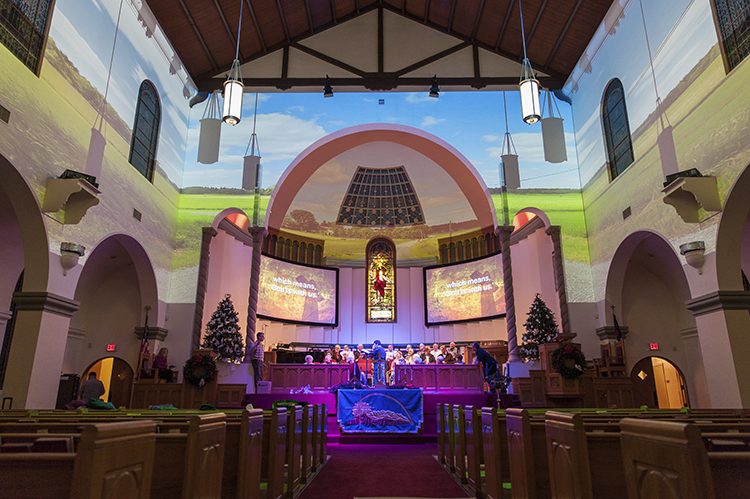 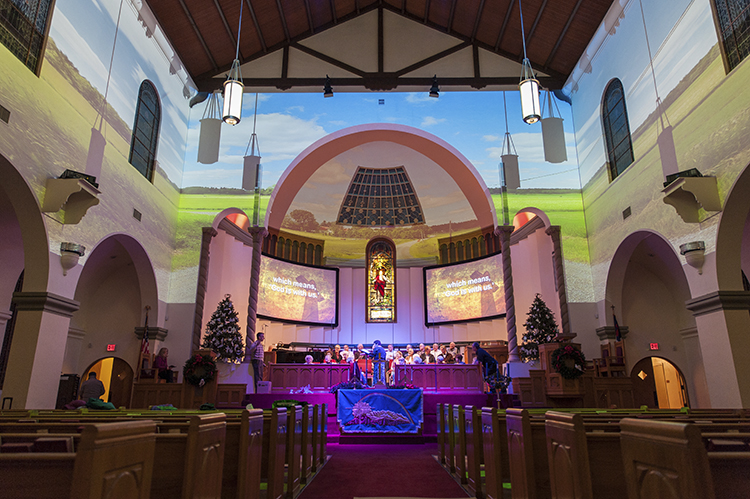 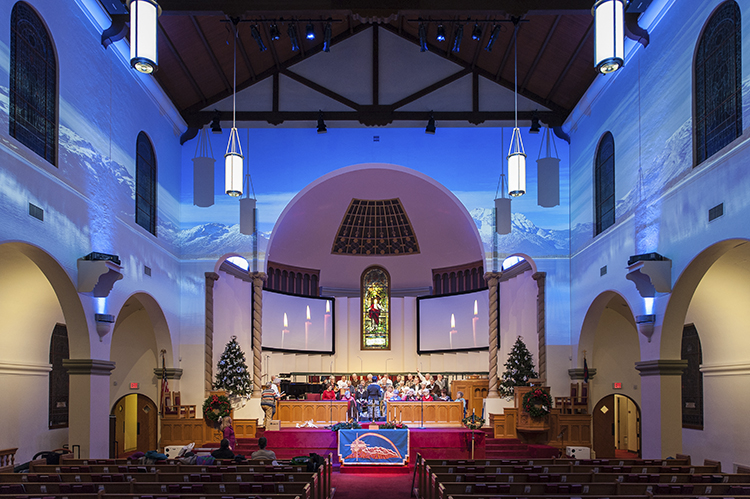 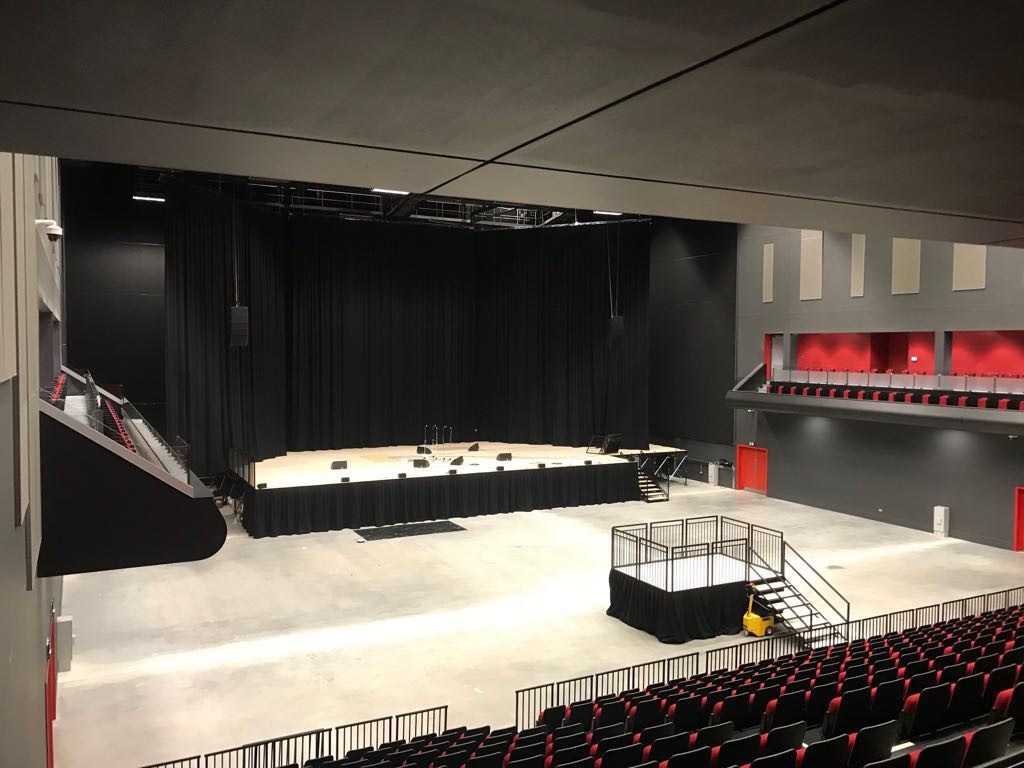 J&C Joel was proud to be appointed by BAM Construction to supply and install a number of their drapery and stage engineering services to the arena.

Bonus Arena is a state of the art, music and events complex in Hull, with a capacity of up to 3,500 people. The arena is used for conferences, exhibitions, trade tours, major touring concerts, stand-up comedy, and sporting events.

J&C Joel began by providing a removable truss measuring 30m in length along with nine EXE RISE Electric D8+Chain Hoists with a maximum capacity of 600kg to the arena, this truss was ideal as it allowed the arena crew to be able to remove it from the staging area with ease when required.

Following this, the Yorkshire based company manufactured and installed a variety drapes all made from black Premier Wool Serge (WS090), for the different stages within the venue.

Firstly, J&C Joel manufactured a rear backdrop for the conference stage from six single drapes. These each measured a width of 5.0-metre by a drop of 11.8-metre and were sewn with 50% fullness, to improve acoustic, masking and blackout properties and create a traditional pleated effect. The drapes were then headed with webbing and ties for an easy attachment to the Triple E UniBeam track (which J&C Joel also provided and installed at the rear of the upper conference stage, as part of the project). These drapes were also cleverly designed to assist in the separation of the stage and the audience when hung through the middle of the arena, to create two smaller separate performance spaces.

Next, J&C Joel designed, manufactured and installed drapery for the main stage. The first set of six single drapes each measured width of 5.00-metre by a drop of 11.65-metre and again were sewn with 50% fullness to ensure each drape had consistency and the same acoustic, masking and blackout benefits and to create a pleated effect. These drapes were also headed with webbing and ties, in addition, they contained a jack chain in the base of the drape to weigh the drape down and ensure it consistently hung straight.

A challenge of this project was the ever-present deadline in which the solutions had to be installed, which was only a few days before the big opening of the arena. Due to the detailed design specification, the teamwork of J&C Joel’s installation crew and the efficiency of the other arena crew members, the drapery, track and stage engineering solutions were finished being installed within the deadline.

Adding to the main stage drapery package, J&C Joel manufactured and installed three stage valances measuring widths of 11.0m, 13.0-metre, and 15.0-metre, all with a drop of 1.8-metre and again sewn with 50% fullness to match the other drapes. These each contained a jack chain in the base to ensure they hung straight, were headed with Velcro and sewn on to 50mm hooks for a strong, durable attachment.

Finally, to complete the drapery package J&C Joel produced a single valance drape for the arena’s mixing platform, measuring 13m wide by a drop of 1.8-metre and 50% fullness. This also contained a jack chain and was attached with Velcro and a 50mm loop.

For another part of the project, J&C Joel worked with Main Stage and Steel Deck to install two temporary stages, one for the main auditorium and one for the conference platform, both made from powder coated mild steel. The conference stage platform proved a challenging factor for this project due to the fact J&C Joel had to design a perfectly flat stage to be installed onto a sloped surface in such a way that it posed no risk to the venue. After careful consideration and an extremely detailed design, J&C Joel produced and installed a stage that could be reversed to become more seats for the auditorium when it wasn’t in use. Overall 42 units of steel decks were used at 8ft by 4ft, resulting in a coverage of over 88m2.

Another challenge of this project was to produce a stage floor that would be perfect for a range of multi-purpose events, therefore, J&C Joel carefully selected the most appropriate fabric from their range; black Joelmat (JM008), 2mm thick. Due to Joelmat’s versatile and durable qualities, it was able to withstand a variety of conditions and adhere to the specification.

In addition to this, J&C Joel installed stage legs manufactured from powder coated mild steel. These were adjustable and measured a minimum of 1.2m high and a maximum of 1.8m, which was beneficial as it meant the height of the stage could vary depending on the purpose of the event, again addressing the multi-purpose requirement of the arena.

Finally, J&C Joel installed an accessibility lift, crowd barriers and provided storage bags manufactured from PUFC. The installation of the accessibility lift was J&C Joel’s solution to overcome an issue with an access ramp which failed to fit in the arena.

Commenting on the project Fraser Davidson, J&C Joel’s Head of UK and EU Projects said: “The client and main contractors were both happy with the end result of the project. J&C Joel provided a full safety briefing on how to erect both stages and gave client training to make sure they were competent with the equipment. BAM Construction was brilliant to work with, their design brief was well-thought out which made the design process smoother meaning all targets for the project were successfully reached within the time restraint. I would like to thank Alutec Industries, Area four, Main Stage, Steel Deck and Aviramp Ltd for their support and hard work throughout the project; I feel we have developed strong, reliable relationships with all that were involved.”