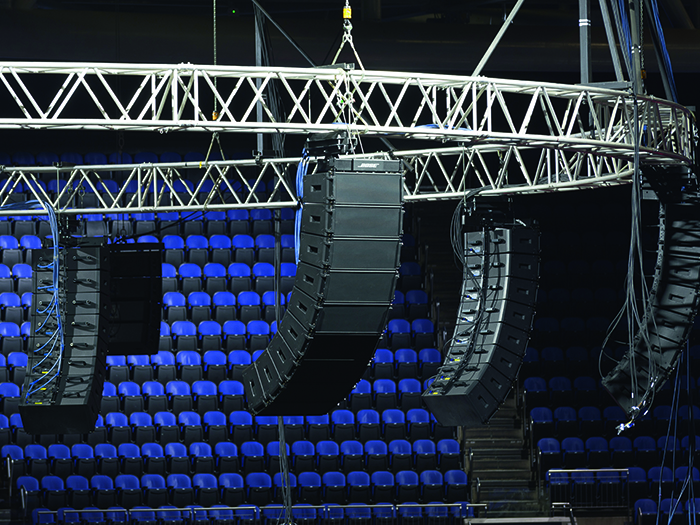 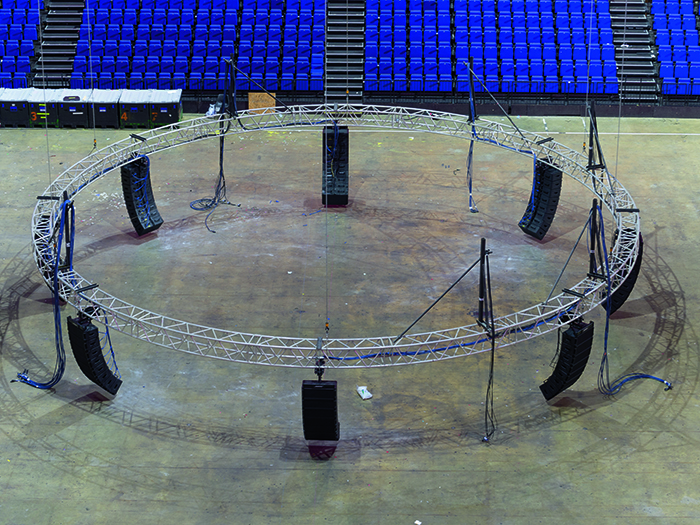 Last year The O2 celebrated its tenth anniversary with a series of concerts featuring Ed Sheeran, alt-j and Celine Dion. Famed for its musical performances, The O2 hosts a plethora of other events including comedy, exhibitions and sporting competitions from the worlds of NBA ATP tennis, martial arts, gymnastics, boxing and was a venue the 2012 Olympic Games.

No matter the type of event taking place, a production audio and Public Address/Voice Alarm (PAVA) system is a vital element of the arena. It is used for every date in the diary for general messaging and security, and with sports games, it is often utilised for FOH presentation and commentary.

Venue operator, AEG, has been working with system integrator, SSE Audio Group for the past 10 years, so when AEG began a life-cycle analysis to identify a critical equipment replacement programme, SSE Special Projects was its first port of call for the technical review. Director of Building Services at The O2, Lee Lacey explained: “Back in 2013, we did a site-wide lifespan analysis and looked at all our assets – electrical, UPS, mechanical, ventilation and of course our PAVA system.

Our consultant said, even though the system did have some life left in it, we should start looking into options. We wanted to enhance the system, not just swap it out like for like. We also needed to work out how to upgrade the system bit by bit without interrupting the arena schedule. The system has to work across the entire venue, even if there isn’t an event taking place.”

SSE Audio Group’s Head of Special Projects, Eddie Thomas, was tasked to provide a new PAVA design with a number of options for The O2. After many discussions and design concepts SSE Audio and AEG settled on a preferred option and set about a five-year upgrade plan. This began with the sitewide PAVA network, then the Back of House (BOH) amplifiers, with the arena bowl loudspeakers and the subwoofer arrays added this year.

For sub-bass, the Bose RMS218 subwoofers were selected. A total of 24 RMS218 cabinets in six vertical hangs were roof mounted alongside the centre cluster arrays. Concert production arrays were installed within the horseshoe end of the arena and comprise four ShowMatch eight-box hangs, which throw across to the rear of the arena at level four. These provide the delay coverage to the upper levels when connected to the visiting / event production PA system.

The loudspeaker setup was designed in Bose Modeler prediction software. “For both elements of the PAVA system, FOH and BOH, Eddie specified the same amplification for consistency of maintenance and performance.

For the Bose ShowMatch arrays in the bowl and production delays, Eddie specified Crown DCi 4|1250 amplifiers for low frequency and DCi 8|600 for the high frequencies, The same Crown DCi-DA models were also used in the BOH loudspeaker zones. The sub-bass arrays are powered by Bose PM8500 amplifiers

Tying the entire system together is the QSC Q-SYS network. Eddie specified a pair of QSC Q-SYS Core 3100i processors as the backbone of the system. From the two remote control racks Q-SYS Cores are linked over dual fibre optic cable backbone to over 100 Crown DCi-DA amplifiers, housed in 16 amplifier racks and also security and control network stations with full GUI access.

Part of the operational requirements are security and general messaging during events, so SSE has provided a number of control screens for The O2. These are quite large – 32-inch touchscreen monitors to be precise. One is located in the main security room, one in the event control room and another in the sound control room. The in-house SSE Audio engineers can use these to look at the status of all the racks; any faults turn orange in the system to indicate that piece of equipment is compromised. The team can then use the touchscreens to interrogate the rack fault, the GUI will then identify exactly where the fault is, so it can be addressed and fixed.

Paging units (GUI), were also designed specifically for this site, that allow full control of both the emergency and event security messaging systems. A message can be recorded, stored in the system, to be played out at the correct time, in different zones, as required. Each zone – 140 in total at the last count – is allocated in the system and there are a number of presets that are used in each zone for almost every event – standard general messages. Live announcements are obviously, also possible.

“We had to consider the network topology and consider reusing the existing fire rated fibre cable backbone. The system is based on two redundant QSC Core servers, each of which has a separate fibre network and two separate equipment racks, so in effect there are two networks running from independent locations. In the event of an incident in one part of the building, it doesn’t compromise the system,” Eddie continued. “We had to look at the network connectivity to the Crown amplifiers, too, because they obviously run on Dante as well as HiQnet, but not on Q-SYS. We sat down with Harman (Crown amplifiers) and over a period of about six to eight months we developed a Q-SYS plug-in, a software plug-in that is an object within a Q-SYS design file. It allows us to extract data from the HiQnet ports on the amplifiers, so we can monitor the loudspeaker circuits, the signal paths and check the condition of the loudspeakers.”

Originally Eddie was going to use Bose RoomMatch but because of his relationship with Bose, he got a little insider knowledge, and hung back for the ShowMatch instead. The Bose line arrays as a general rule, run on Bose amplifiers, so matching them with Crown for this project posed another challenge for Eddie and the team. He had to develop DSP tunings that would work within the Crown amplifiers, and offer the optimum performance expected from the ShowMatch. “We sent the two models of the amplifiers to Bose, and they put in some DSP tuning, which were not far off what we’d put in ourselves, so we were pleased with that,” said Eddie.

The Bose arrays have been flown on a central circular truss in the bowl. Two of the arrays feature nine ShowMatch cabinets, and the remaining six comprise eight boxes. “ShowMatch offers great coverage, right down to the floor, and that’s because of the different elements that are available within the series – 5º, 10º and 20º with different horizontal dispersion horns. We’re using a combination of those in the arrays to give us even coverage all the way down the bowl. The centre clusters cover the entire audience, all the way down to the front seats but don’t cover the arena floor,” Eddie continued.

Scheduling a major audio install in the world’s busiest music venue is no simple task. SSE developed a phased upgrade to the process: audio network and amplification first in August 2017, with the central cluster completed later that year. The production delays were added in March 2018 with the Sub Bass upgrade completed in May 2018

“The venue now has a great sounding, robust and incredibly flexible audio and PAVA solution”, reflects SSE’s Eddie Thomas. “For sporting events and other productions in the round, the system is used as a stand alone audio solution. For concerts and touring productions, where a stage is built at one end, the touring system provides the main L-R audio but will interface with the house system for delays and infill. In all applications the system is the venue’s PAVA solution, enabling security and management staff to provide guidance in the event of an incident or emergency.”